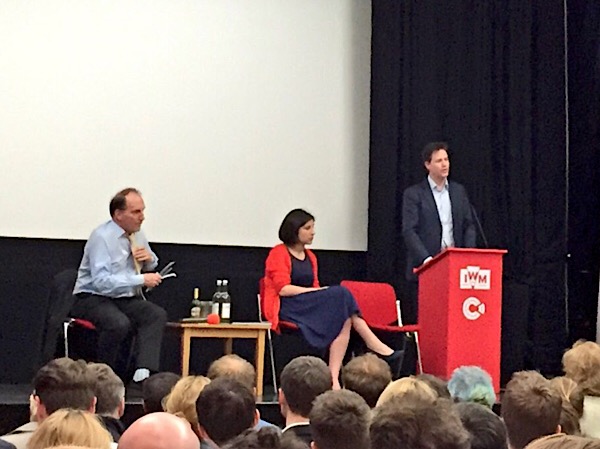 Nick Clegg addresses a full house of Lib Dem supporters at the Imperial War Museum. He was joined on stage by Sir Simon Hughes and Cllr Anood Al-Samerai.

The event, hosted by Southwark Liberal Democrats, was held in the cinema of the Imperial War Museum.

Mr Clegg warned that Britain now faces "a predicament quite unique in our post-war history" and that last June's Brexit vote had placed the country in "great, great jeopardy".

He castigated the "cast of opportunists and liars" at the forefront of the Leave campaign and said they "knew they could lie and escape any consequences of their mendacity".

As well as blasting the "cabal of older white men" who control the media industry, he criticised the BBC's coverage during the referendum campaign, claiming that the corporation had been "kneecapped" by eurosceptics.

He also accused business leaders of failing to make the case for the benefits of EU membership during the referendum campaign, branding their contribution to the public debate as "pathetic".

The former DPM urged party activists to be unrelenting in reminding voters what they were promised by the Leave campaign before the referendum and comparing it with what happens in reality.

During a question and answer session chaired by Cllr Anood Al-Samerai, leader of the Southwark Lib Dem group, Mr Clegg fielded questions on the future of Northern Ireland, the impact of Brexit on industry, how leaving the EU will affect pan-European environment policy and many other topics.

Former Bermondsey & Old Southwark MP Sir Simon Hughes wrapped up the evening with a vote of thanks in which he recalled how as a student he had spent a year in Bruges which had opened his eyes to the benefits of pan-European collaboration and cultural exchange.