Broadcaster Jonathan Dimbleby was among a group of more than 80 walkers who followed a circuitous 50 km route from St Thomas' Hospital in Lambeth to Guy's Hospital in Southwark to raise money for a cancer care charity. 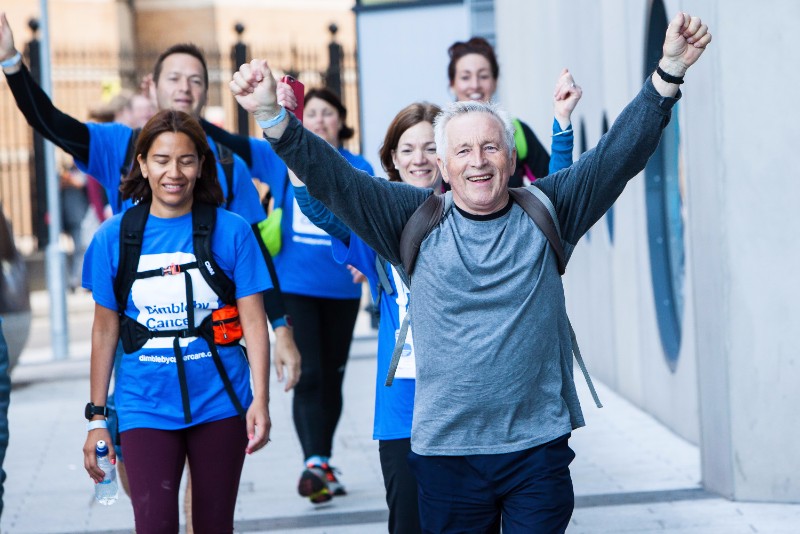 Jonathan Dimbleby came straight from Friday night's post-election live broadcast of Any Questions? on BBC Radio 4 to take a leading role in the overnight sponsored walk in aid of the charity his family established more than half a century ago.

Dimbleby Cancer Care was set up in memory of his father Richard Dimbleby who was treated for cancer at St Thomas' Hospital.

Walk50 is now its its third year as a fundraising event for the charity, with the latest challenge pulling in at least £35,000.

Starting at St Thomas' Hospital in Lambeth the route took walkers out as far west as Hammersmith before heading back through central London taking in famous landmarks including Trafalgar Square, Buckingham Palace, The Mall, the Tower of London, Canary Wharf, and as far east as Greenwich, passing through the foot tunnel beneath the Thames. Walkers finished at Guy's Hospital, in the charity's new support centre at Guy's Cancer Centre.

The charity provides practical and psychological support to people living with cancer and to their families and carers and is also developing a website resource to help people find care and support services nearest to them which is due to be launched later this month.

Jonathan Dimbleby said: "This was my third 50 km walk and especially enjoyable this time – no blisters – and my wife Jessica, and my daughter Kitty joined us all as well.

"It was great to see so many people share in the delight of walking through London by night. No city is more spectacular especially in good weather. The commitment and camaraderie of everyone – including the small army of volunteers who gave up their time to help run the event – was wonderful to witness. .

"We are very grateful to everyone who has taken part and helped us raise nearly £200,000 towards funding our work with those living with cancer, their families and their carers. The demand is ever-growing. For this reason we'll be out again this time next year. I hope you'll support us once more."

The walkers were supported by a 20-strong team of volunteers who helped out at various pit stops along the route that took in many of the city's famous landmarks.