Facilities for cancer patients at Guy's and St Thomas' hospitals are likely to receive a £20,000 boost after broadcaster David Dimbleby auctioned two pieces of contemporary art in aid of the Dimbleby Cancer Care charity. 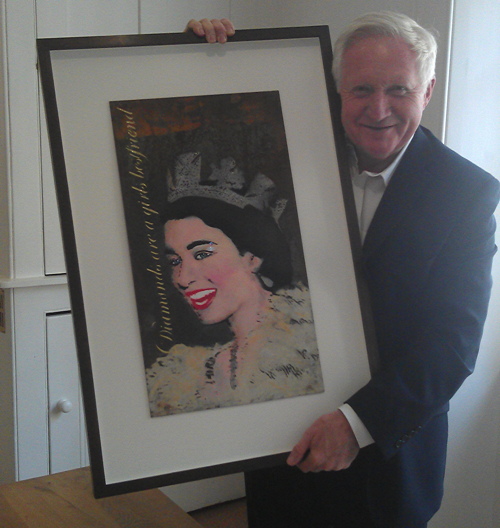 David Dimbleby with the piece by Bambi which sold at auction for £11,250

Tuesday's auction at Christie's saw Damien Hirst's Spin Skull and Bambi's Diamonds Are A Girl's Best Friend fetch a total of £32,500 – far in excess of the combined £6,000 estimated sale price.

Both pieces were given to David Dimbleby by the artists to auction in aid of the cancer care charity set up in memory of his late father Richard.

The Question Time presenter is donating the proceeds of the sale to Dimbleby Cancer Care which funds cancer care services at Guy's Hospital and St Thomas' Hospital as well as research into cancer care issues. The charity expects to receive approximately £20,000 from the sale.

Spin Skull was created by Hirst with Dimbleby's assistance when they were filming Seven Ages of Britain for the BBC in 2009.

Diamonds Are A Girl's Best Friend is part of a series of works produced by Bambi – who has been described as a female Banksy – to mark the Queen's Diamond Jubilee, including a piece of street art in North London featuring the Queen on a diamond playing card earlier in the year.