A Waterloo Bridge-inspired bench has been placed in St John's Waterloo churchyard on the 200th anniversary of the first bridge being opened. 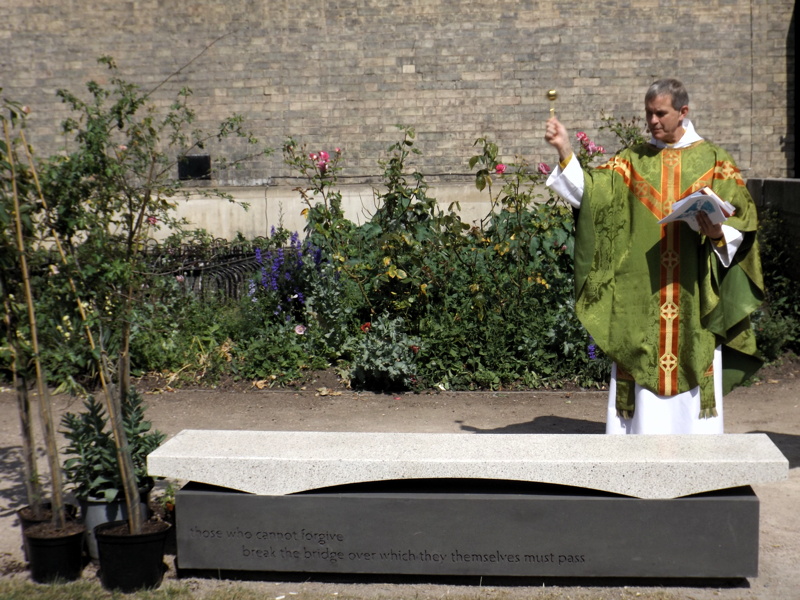 On Wednesday 18 June 1817 the Prince Regent landed by barge on the Surrey bank, now South Bank, to open the new crossing.

The Memory Bench was dedicated on Sunday morning 18 June by the vicar of St John's, Canon Giles Goddard, at the start of the Sustainable Flower Festival Sung Eucharist.

The singing of the first hymn Praise to the Lord, the almighty, the King of creation started outside with the congregation around the bench.

The seat has been designed by MSMR Architects, based in Waterloo's Exton Street overlooking the churchyard, as part of their contribution to the London Festival of Architecture 2017.

The bench echoes the curves of today's familiar bridge designed by Sir Giles Gilbert Scott and opened in 1945.

The Georgian granite bridge, originally planned as early as 1809 to be called the Strand Bridge, had been designed by George Rennie who lived and worked in Stamford Street. He based the Thames crossing on his Kelso Bridge which survives in Scotland.

Meanwhile he was also working on Southwark Bridge which opened in 1819.

The 1817 Waterloo Bridge celebration took place in glorious weather and included a Waterloo Fair held near the site of St John's Church. In addition to swings there were cakes, gingerbread, beer and gin for refreshment.

This may have been the first time the area was called Waterloo. The erection of the toll bridge led to the opening of The Old Vic in 1818 and St John's, designated a 'Waterloo church', in 1824. The station followed in 1848.

The bridge opening was on the second anniversary of Battle of Waterloo and the Prince Regent was met at the top of the bridge stairs by the victorious Duke of Wellington.

• Two granite slabs from the old bridge are now part of the Commonwealth Avenue Bridge in Canberra Australia as reported in an anniversary feature in The Canberra Times.

• Waterloo Bridge was one of the topics examined at the Southwark Stanza poetry evening held at St John's on Friday as part of the Waterloo Festival.

• Next Saturday Waterloo's 1945 bridge will be explored in dance, music and film at the Voices of Waterloo event.