There's no need to wait for the lift or take the stairs to travel from the galleries to the exit at Tate Modern - just take the slide right down the middle of the Turbine Hall. 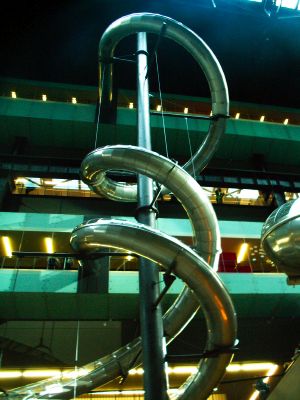 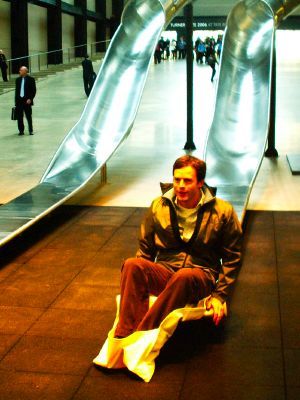 Test Site by Carsten Holler is the latest in the Unilever Series which has seen a different artist devise a way of using the Turbine Hall space every year since Tate Modern opened in 2000.

Three of the chutes depart from the main gallery levels (3, 4 and 5) and two smaller slides link the Turbine Hall bridge with the gallery's lowest level.

The longest slide is 55.5 metres and drops 26.5 metres from level 5. All slides have gradients between 30 and 35 degrees.

"Carsten Holler has eloquently and innovatively transformed our means of navigating in the vast space of the Turbine Hall," says Tate Modern director Vicente Todoli. "In addition, he has offered an experience, the results or effect of which we have yet to understand,"

Holler believes that slides are underused as a practical proposition in homes, offices and public transport.

The artist says that it's not necessary to use the slides to appreciate the installation; watching how other people use the slides and react to the speed and sensation of the chutes is just as important.

Holler insists that slides are not just for children.

The two shortest slides can be tried on a turn-up-and-go basis. The three longest slides require a free timed ticket and a special mat.

Height restrictions apply; riders on the longest slide must be at least 1.4 metres tall. For the slides from levels 3 and 4 the minimum height is 1.1 metres. The two slides from the Turbine Hall bridge are restricted to those taller than 0.9 metres.