Tate Modern's long-awaited extension will open to the public in June 2016, six and a half years after the start of work. 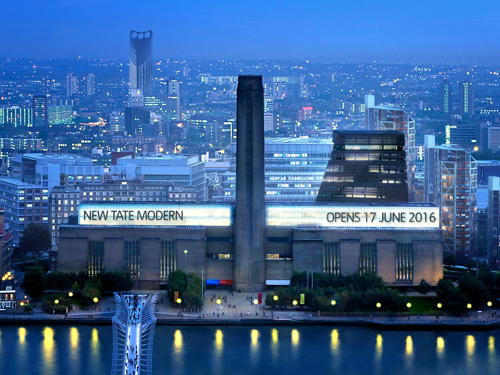 The gallery's doors will open to the general public on Friday 17 June 2016 – though 5,000 schoolchildren from around the UK will get a preview the previous day.

The brick latticework cladding is currently being added to the 10-storey extension which has been built at the south-west corner of the former Bankside Power Station.

The new building has been designed by Herzog and de Meuron, the Swiss architects who oversaw the creation of Tate Modern in Giles Gilbert-Scott's power station a decade and a half ago.

When the expanded gallery opens to the public, the existing Tate Modern to the north of the turbine hall will be known as the Boiler House, with the southern half of the complex named as the Switch House.

Cllr Mark Williams told cabinet that the expanded Tate Modern is likely to overtake the British Museum as London's most popular attraction.

However, Tate director Sir Nicholas Serota has played down the rivalry between the two institutions.

"I'm delighted that Southwark are supporting the Tate," he said on Tuesday.

"Southwark is an ambitious borough and I'm sure it wants to do as well as Camden, but essentially it's not a competition between the British Museum and Tate Modern as to who can pack in the most visitors."

Although Southwark's contribution has been described as the 'last' Ł1 million to enable the project's completion, in reality Tate still faces a Ł30 million funding gap to raise the full Ł260 million cost of the scheme.