Winter sunshine drew a large crowd to watch the Bishop of Woolwich Christopher Chessun preside at the traditional Blessing the Waters on London Bridge. 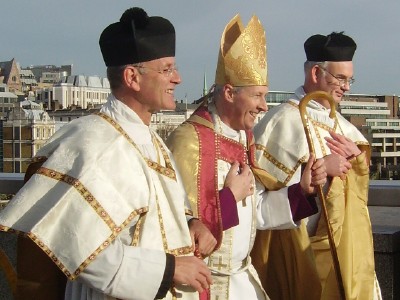 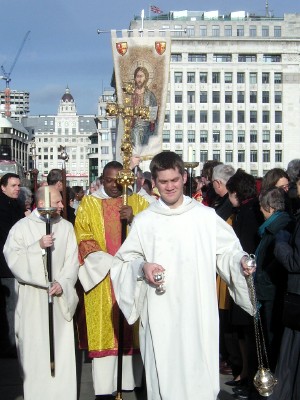 The procession from Southwark Cathedral arrives on London Bridge

Although Christopher Chessun is a Southwark bishop he processed onto the bridge from the north end as he had been preaching at St Magnus the Martyr in the City.

A procession of Southwark Cathedral clergy and congregation representatives arrived from the south side to meet the City congregation on the Southwark boundary in the middle of the bridge.

The Thames tradition follows the Orthodox custom of hurling a cross into water as a symbol of Christ's birth and baptism which is celebrated at this time of the year.

For the first time the London Bridge blessing was on the downstream side due to a fast receding tide. After the bishop had thrown the wooden cross into the river it was swept at speed down the Pool of London towards Tower Bridge.

Earlier there had been prayers for the victims of the Marchioness disaster and among those watching the floating cross was a Marchioness survivor.

Also present and in uniform was Captain Duncan Glass representing the Corporation of Trinity House which has been looking after the safety of shipping and the well being of seafarers since 1514.