An annual service to pray for God's blessing on the River Thames was held in the centre of London Bridge on Sunday lunchtime. 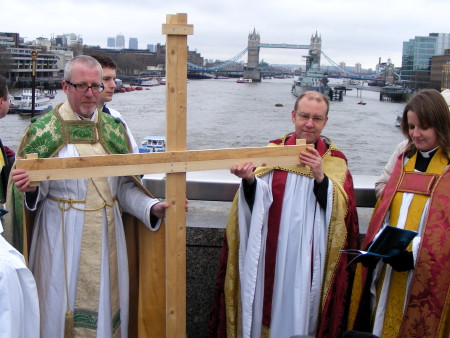 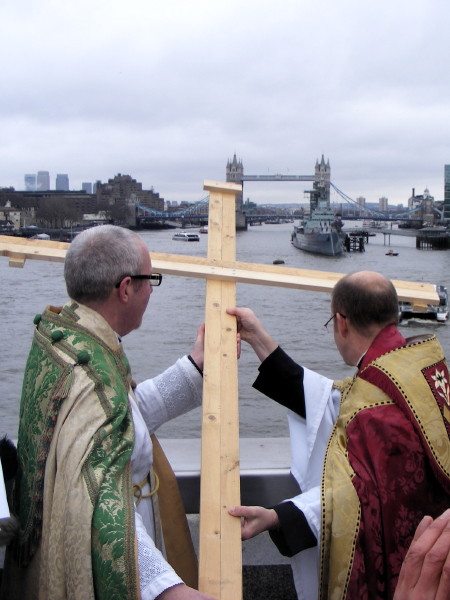 The clergy and congregations of Southwark Cathedral and the church of St Magnus the Martyr, whose parish boundaries meet on the bridge, processed to the centre for a short service.

This Thames tradition follows the Orthodox custom of hurling a cross into water as a symbol of Christ's baptism which is celebrated on the Sunday after the Epiphany.

Earlier there had been prayers for people working on the river and for those who died in the water during the past year.

The annual London Bridge event, which draws on ancient customs, was established five years ago at the initiative of Fr Philip Warner, parish priest at St Magnus.

Earlier, in his sermon at Southwark Cathedral's Choral Eucharist, the Dean of Southwark Very Revd Colin Slee had criticised the recent anti-immigration intervention by former Archbishop of Canterbury Lord Carey of Clifton.

The Dean said: "It is extraordinary that this week on the very day Christians remembered Joseph taking Mary and Jesus to safety in a foreign land which did not even share their faith, the former Archbishop, George Carey, should publish an article saying immigration should be limited and preference should be given to people of this country's majority faith; utterly extraordinary. Joseph and his family wouldn't score immigration points to England's green and pleasant land by those criteria."