The consortium behind the planned Shard of Glass at London Bridge insists that it "remains committed" to the scheme despite reports of a dispute between the firms. 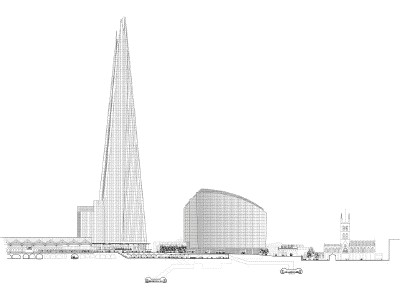 The board of CLS Holdings – a one-third partner in the Shard and neighbouring New London Bridge House scheme along with Sellar Property Group and the Halabi Family Trust – issued a statement on Friday refuting what it described as "inaccuracies" in an article published in the Financial Times.

The alleged row centres on claims that that CLS and Sellar Property Group wish to charge Simon Halabi Ł28 million for 'development and project management' fees on the two schemes.

Not so, according to CLS: "This figure covers a significantly wider brief and represents the combined development fees to be charged to the consortium by SPG and CLS in their roles as developers of the Shard and New London Bridge House, of which Halabi's Trust, SPG and CLS will each bear a one third share."

CLS also refutes a suggestion in the FT article that CLS and SPG paid Halabi Ł12 million in an out of court settlement: "That is not the case. In fact Halabi's Family Trust paid Ł3.2 million to CLS and SPG to purchase a one third interest in New London Bridge House. It is believed that Halabi's Trust may have been paid a substantial sum by his trustees' insurers, however neither CLS nor SPG had any involvement in that arrangement and can therefore not confirm that this substantial payment has been made."

According to the FT the three partners last year agreed that any future disputes would be settled by an independent arbitrator.

The paper suggests that Mike Hussey, managing director of Land Securities' London portfolio (which includes Bankside 123 in Southwark Street) has given evidence on behalf of Mr Halabi.

In its statement, the board of CLS Holdings added that "...the evidence of Mr Hussey on behalf of the Halabi Family Trust has been rejected by the London based expert. Independent experts whose evidence has been submitted have fully substantiated the proposed development fees."

The CLS statement concludes: "The consortium remains committed to delivering two world class buildings in conjunction with a modern infrastructure for the London Bridge Quarter."

The demolition of Southwark Towers – the PricewaterhouseCoopers building which occupies the future site of the Shard – had been expected to start this year.

An interim financing package for the development was agreed last autumn after Transport for London and Shangri-La Hotels pre-let space within the landmark tower.