Have you wondered what's happening behind the scaffolding at St George the Martyr church in Borough High Street? Church members took a tour this week to check on progress. 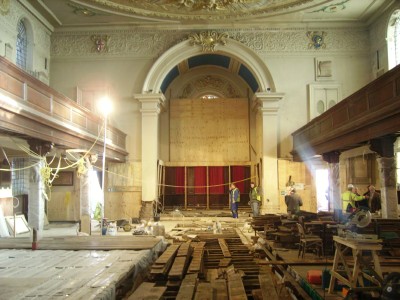 View from the west end 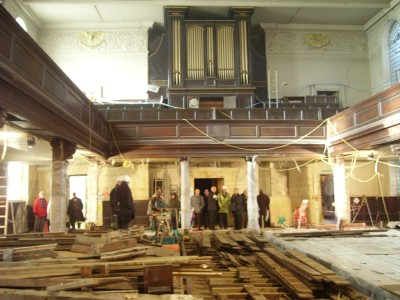 View from the east end 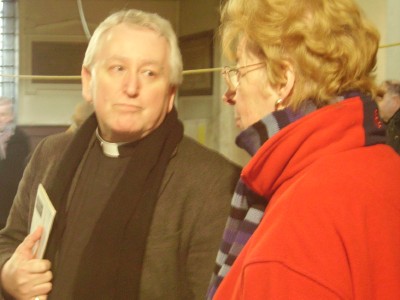 Fr Ray Andrews is to be the new parish priest 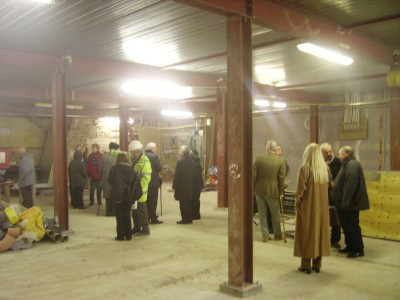 The crypt is to become a community centre

The small party included the Revd Ray Andrews who is due to be installed as priest-in-charge when the historic church reopens later this year.

The party assembled in the now greatly expanded crypt to view the new supports which have replaced the brick vaulting. This downstairs area is to become the Little Dorrit Centre – a flexible community space complete with a lift and kitchen.

Bodies removed from the crypt to allow the church building to be stabilised are being reburied in Nunhead Cemetery.

Upstairs in the main church there was an opportunity to see the ancient flagstones being relaid and inspect the new underfloor heating system.

Builders and restoration experts are currently using the Little Dorrit Vestry as a works office. The room is expected to be a major attraction for fans of Charles Dickens when the church is eventually open on a regular basis.

It was announced that progress should allow the congregation to return for Holy Week with the first service in the restored church being held on Palm Sunday. The licensing of Ray Andrews will take place just three weeks later on the Eve of St George's Day, Sunday 22 April.

The congregation of St George's has been worshipping at nearby Guy's Chapel during the restoration works.

• The Revd Ray Andrews, at present a curate at St John's in East Dulwich, was ordained priest at Southwark Cathedral in 2004 at the same time as St George's curate Desrene Swaby. Fr Andrews succeeds Tony Lucas who retired last year after 14 years as Rector.