A 47-metre frieze of photographs featuring celebrities and local residents has been unveiled outside the Royal Festival Hall on the South Bank. 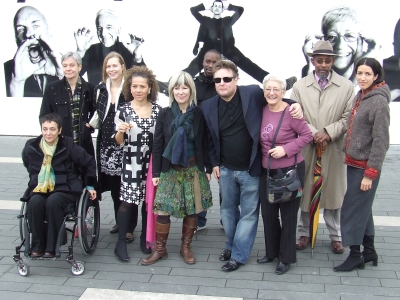 Rankin with some of those featured in the frieze 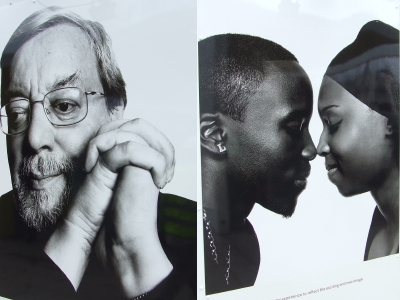 Rankin's Front Row has been created in support of the final phase of the Royal Festival Hall's Name a Seat campaign.

Every donor paying from £300 for a seat will have their name engraved on a plaque fixed to the seat in the auditorium when the Royal Festival Hall re-opens in June.

According to Southbank Centre bosses the Name a Seat campaign has already attracted hundreds of people to join in. Friends have clubbed together, individuals have named seats after loved ones and families have celebrated parents or children.

Chief executive Michael Lynch explains: "Our message is clear: the Royal Festival Hall is for everyone – all donations to the seat campaign will be gratefully received and acknowledged in an equally visible way."

Rankin – who got an early break in his photographic career when he came second in a South Bank photo competition – has spent a year photographing 39 artists, musicians, writers, directors and representatives of the local community.

"When I was asked a year ago to take on this project, I could never have believed how many great people I would meet. Not just world famous artists, but friends and neighbours of the Royal Festival Hall," says Rankin.

"For me, this really has been a labour of love. I hope everyone will want to join in supporting the Name a Seat campaign and take their places in the front row of a true 'people's palace'."

The virtual 'front row' stretches the whole length of the hoarding along the Royal Festival Hall's river frontage.

Joanna Lumley, Siobhan Davies, Anthony Minghella and Sir Terence Conran are among the well-known artistic and literary figures who have taken part, their portraits accompanied by their own stories and their memories of the Royal Festival Hall.

The original 1951 seats in the Royal Festival Hall are being restored and reconfigured to give more leg-room.