Simon Hughes and Southwark Liberal Democrats have launched a petition to save Borough Post Office from closure. 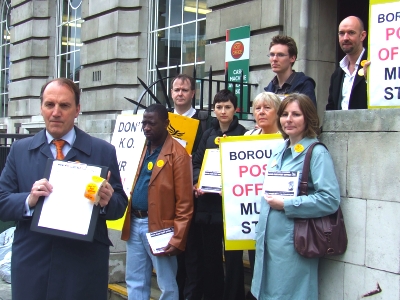 Last month the Post Office announced that the Borough branch in Borough High Street (close to Borough tube station) is to be franchised to a private operator and is likely to be moved into a local convenience store.

"We're staggered by the proposed closure," says Chaucer ward councillor Lorraine Zuleta. "What we hope to do is to raise awareness and collect enough signatures and lobby so that they won't close it."

Cllr Tim McNally adds: "It's such a busy post office – you always have to queue in there – and it offers such a big range of services you can't get at the small sub post offices."

"We've got an online petition and we're encouraging people to sign that."

It is two decades since North Southwark and Bermondsey MP Simon Hughes first campaigned to save this branch: "We fought against the proposal to close Borough Post Office. There was a huge community campaign and we won. And the post office has continued to work and to serve the local community. It's a hugely important part of the Borough.

"Borough Post Office is as busy as ever; if not busier," he added.

"We're making sure that people know now that the future of this post office is completely uncertain."

He continued: "I'll be having a meeting with Post Office people to see exactly what the plan is. They clearly don't know, and it's while they are realising that they don't know that we are saying that this is an office we want to keep.

"I hope that the public will respond well to that and through the London SE1 website I hope people will express their support."

"We're starting the campaign today. I've got a debate in the Commons on Friday about the future of Crown Offices in London as a whole but obviously motivated by this.

"We'll be here on a regular basis to make sure people understand the threat and sign up in support.

"This is a service that a huge number of people use and want to use. We will fight to keep this office just as if there was any threat we would fight to keep the offices in Walworth Road, Blackfriars Road and Jamaica Road.

"These are the Crown Post Offices and if you can't persuade the Post Office to keep a post office in Borough High Street, one of the oldest high streets in the country, then I think there's something wrong."

Asked about the proximity of the London Bridge Post Office at the northern end of Borough High Street (which isn't under threat), Hughes insisted that the level of demand justified the maintenance of both offices: "I've never seen this office sitting idle or London Bridge sitting idle," he said.

"Lots of people who come here [to Borough Post Office] don't go to London Bridge as a matter of course."

"I haven't given up on a post office coming back in Abbey Street or Bermondsey Street," says the MP who campaigned against both sub post office closures.

"I hope that by the end of this year when the Bermondsey Square development is completed we'll then have the case to go back to the Post Office to argue for a sub post office somewhere at the junction of Bermondsey Street and Long Lane."