The Crown Post Office opposite Borough Tube Station is to be replaced by a counter in a new Costcutter store in Southwark Bridge Road. 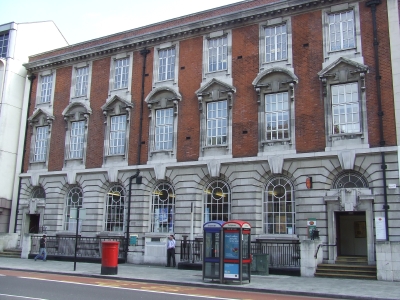 Eleven months ago Post Office Ltd announced its intention to close the Borough Post Office and find a franchisee to run a replacement service in the locality.

The new branch will be in a Costcutter store in the new MyBASE1 development at 124-144 Southwark Bridge Road, a third of a mile from the existing premises at 239 Borough High Street.

"Franchising has been an effective way of running branches for many years and this agreement is good news for the community in Borough. It is a way in which we can reduce costs whilst bringing benefits to customers through longer opening hours and better surroundings.

But North Southwark & Bermondsey MP Simon Hughes – who led protests when the Borough Post Office closure was announced last year – is not impressed: "This is a worrying plan which needs the closest attention and has significant risks.

"With the local community, local councillors and others, several years ago we won the argument to keep open the Crown Post Office in the Borough. Since then, the number of residents and businesses locally has increased as has the number of tourists. Nobody could argue that the familiar and appreciated Borough Post Office is not a service which is much used and much needed."

He added: "On top of all the other post offices in Southwark currently on the list for closure and the subject of very rigorous campaigns to keep them open, we could have done without this further threat and disruption from post office management.

"I shall make sure that there is full consultation with all surrounding residents and businesses and try to make sure that the final decision reflects the views of the local community and the best possible site for the Borough's main post office.

"The community has my assurance that I will be as vigorous in representing the community's views on these plans as on all previous closures the post office has proposed."

Last month plans to close Dockhead Post Office – along with another 168 branches in London – were announced.

This week Mayor of London Ken Livingstone confirmed that he is to seek a judicial review of the handling of the consultation process.

"After writing to the Post Office Ltd with my concerns and receiving an inadequate reply I'm left with no alternative but to go to court," he said.