Look under 25? You’ll need to show ID to buy alcohol at Costcutter

Simon Hughes MP visited the Southwark Bridge Road Costcutter store for the launch of its new Challenge 25 policy on alcohol sales - and to check on progress since the Borough Post Office moved in last summer. 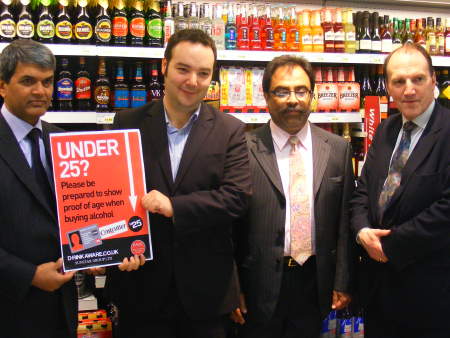 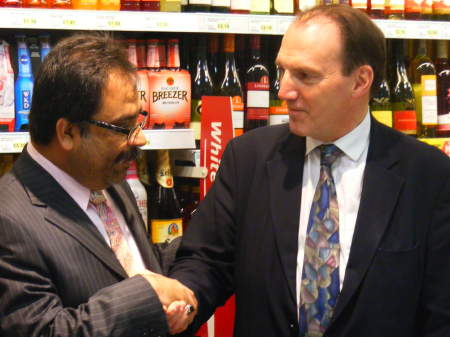 The Southwark Bridge Road store is one of Sunstar Group's 20 convenience stores, five of which are in Southwark.

Sunstar's Syed Husain believes his group is one of the first in the London area to move from the familar Challenge 21 scheme to a Challenge 25 policy.

This means that customers buying alcohol who appear to be under 25 will be asked to show ID to demonstrate that they are over 18.

Syed Husain says that it is difficult for staff to identify underage customers and that legitimate customers will not mind showing identification. "We want to be responsible," he says.

The North Southwark & Bermondsey MP chatted to customers and asked them about their experience of the new sub post office which replaced the old crown post office near Borough tube station last summer.

He also met post office managers and representatives of Country Choice, the firm behind the Bake & Bite in-store bakery concession.

"I've never been against the principle of their being a combination of a post office and a private franchisee. I'm just keen that we keep our post offices," said Simon Hughes.

"I wasn't happy – as the locals weren't – about the post office closing in Borough High Street but I was persuaded on the economics of it ... that it had to happen."

Mr Hughes said that he couldn't officially endorse the Challenge 25 scheme but he believed that store owners should be free to implement such a policy.

"One of the key issues in the retail business is being responsible about how you sell products like alcohol," says Shane Brennan of the Association of Convenience Stores.

"In Sunstar they've got a really good system to protect this community from underage sales and do their bit to tackle problems in the community."