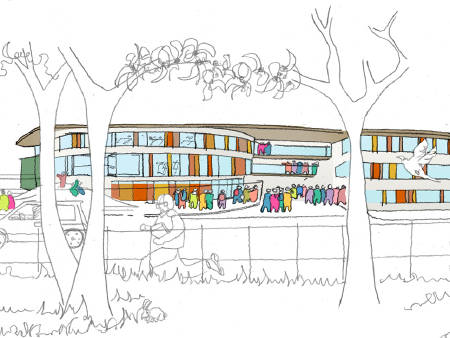 Balfour Beatty's proposals for the new academy on the site of the present Walworth Upper School will be further refined when they talk to the school and local community during pre-planning consultation in January.

"Balfour Beatty's interpretation of the brief is really exciting and they've shown great care and attention to meeting the needs of the school and our neighbours," says Anthony Williams, Walworth Academy chair of governors.

"Local residents can look forward to Walworth Academy having buildings which are not only inspiring but also immensely practical. This is going to be a great building where staff will enjoy teaching and students can learn and achieve.

"I hope that people will come and see the designs for themselves and tell us what they think in January."

Balfour Beatty suggest siting the main school buildings between Shorncliffe Road and Mina Road, facing Burgess Park. This would include two three-storey buildings under a single canopy roof, with each level linked by glass walkways to form a central courtyard that will be the heart of the Academy. They also suggest making the most of the attractive Victorian building on Mina Road, keeping it for teaching and administration.

Their proposals include improving safety and security on the site for pupils, staff and visitors. A new main pedestrian entrance opposite Burgess Park could open into attractive landscaped grounds. There could also be new games and play areas along Albany Road. Ideas include a new sports hall at the centre of the site; this and a number of other facilities could be used by the community outside school hours.

Environmental sustainability will be a key feature of the final design. The building and its mechanical and electrical systems will be designed to meet the latest environmental targets.

Building will start in May 2008 and be completed towards the end of 2009, with pupils moving into the new buildings in spring 2010.  To minimise disruption, building would start on the playground area first so that pupils can stay in the existing building until the new facilities are complete.

Like the nearby Globe Academy (currently Geoffrey Chaucer Technology College), the Walworth Academy is sponsored by education charity ARK – Absolute Return for Kids.

• Pupils, parents, staff and residents are invited to an open evening at Walworth Academy on Thursday 10 January from 6.30pm to 8pm where the architects BDP will be available to discuss their initial thoughts.