Pensioners from Southwark, Lambeth and across London joined Ken Livingstone outside City Hall on Wednesday to support the Freedom Pass. 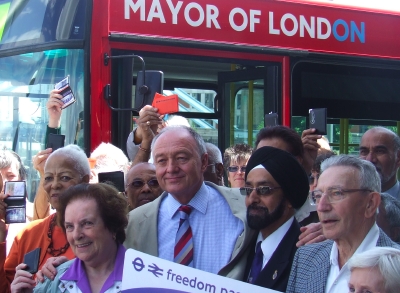 The Mayor of London is currently engaged in a spat over funding for the Freedom Pass with London Councils, the Southwark Street-based federation of the capital's borough authorities.

The Freedom Pass gives free travel on buses, tubes and trains to more than a million Londoners aged over-60 or who have disabilities. It is funded by London's 33 local authorities who have to agree a funding formula with the Mayor's Transport for London agency.

'I will defend the Freedom Pass against threats to its future, from London Councils, Assembly Members, MPs and Peers, as long as I am Mayor of London," says Ken Livingstone.

"The Freedom Pass is a lifeline for thousands of older and disabled Londoners, saving them hundreds of pounds a year. Those now threatening it have no idea the storm of protest any attempt to cut back on it will unleash."

But London Councils (formerly the Association of London Government) denies that the Freedom Pass is under threat.

In a recent open letter to the Mayor, Cllr Daniel Moylan, chair of London Councils' transport and environment committee wrote:

"You have recently been telling Londoners that London Councils is putting the Freedom Pass at risk. You know full well that that is not true. There has never been a threat from us to the free travel enjoyed by London's older and disabled people. The reality is that if there is any danger to the future of the Freedom Pass it is coming from you."

London Councils accuses the Mayor – through Transport for London – of making unreasonable demands. They claim that the cost of providing free bus and tube travel has risen 52 per cent since Livingstone became Mayor.