The promoters of an ambitious plan to build a privately-funded tram line from London Bridge to Camberwell claim it could be up and running within just two years. 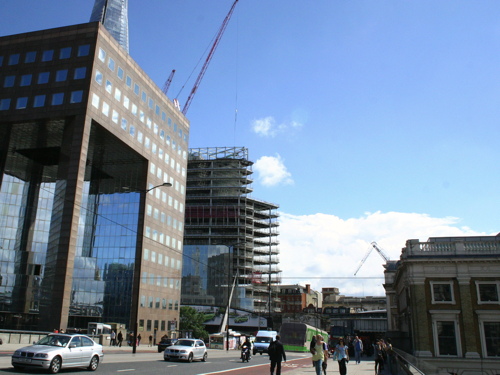 A tram at the proposed terminus at the southern end of London Bridge. The tram stop would be designed with future expansion north of the river in mind 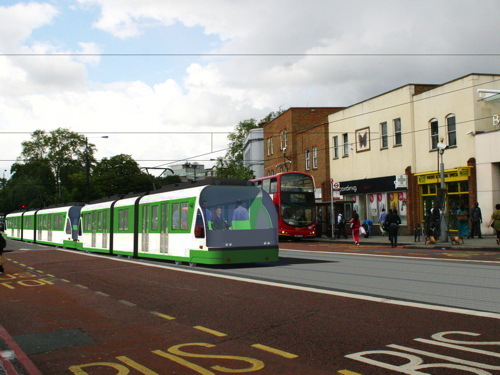 How the Southwark Super Tram could look at Camberwell Green

Tram Power has gone public on its plans for the Southwark Super Tram, a light rail route from London Bridge to Camberwell via Elephant & Castle.

The Bootle firm has linked up with Bermondsey Street-based architect Milan Babic to produce early plans for the schemes which it says could be built in phases and be complete in 2014 if planning permission is granted.

We wrote about Tram Power in 2008 when the firm's founder Professor Lewis Lesley claimed that the Cross River Tram via Waterloo Bridge – abandoned by Boris Johnson when he became Mayor of London – could be delivered with private funding.

Although Tram Power has also devised light rail schemes in Galway, Preston and elsewhere, none has yet come to fruition – but Professor Lesley is confident that by "negotiation and being patient and persistent" he will eventually make his plans a reality.

Now Professor Lesley has drawn on elements of the Cross River Tram scheme and the 2003 study by the City of London Corporation to devise a tram route entirely within the borough of Southwark.

Liberal Democrat councillor James Barber – a long-standing advocate of trams in London – has helped the firm make connections in Southwark and spread the word about its proposals.

The route would provide a fast connection between Guy's Hospital, King's College Hospital and the Maudsley Hospital which are likely to become part of a single organisation as part of the King's Health Partners merger project.

The tram would share road space with buses and other traffic but traffic management systems – such as traffic lights – would give the tram priority.

The route would be designed with future expansion in mind with potential extensions across London Bridge, down Old Kent Road, up London Road from Elephant & Castle and down Kennington Park Road.

The Southwark Super Tram would have a capital cost of just Ł55 million compared to Ł1.3 billion for the Cross River Tram, and would be funded by private investors through a bond issue. The firm is also exploring options with the Government's new Green Investment Bank.

Unlike the Cross River Tram which would have required an order under the Transport & Works Act, the Southwark Super Tram would only require planning permission from Southwark Council.

However, it would also require the cooperation of Transport for London as highway authority for part of the route – and it is unclear how a privately promoted tram service would integrate with London-wide ticketing arrangements such as Oyster and the Freedom Pass.

Tram Power has developed a way of laying tram track in precast sections which would minimise the need for road closures. Overhead electricity wires would be attached to buildings along the route of the tram system to avoid the need for extra poles on streets and pavements.

Professor Lesley has developed a tram model called the City Class tram which he claims can be built much more cheaply than most light rail vehicles because it uses components that are widely available rather than custom-made parts.

A depot for the system could be built at Bricklayers Arms which would be reached by a branch along Great Dover Street.

Tram Power's claims have been greeted with scepticism by Southwark's Labour administration.

"Labour has been fully supportive of bringing a tram to Southwark since the early 1990s," said Cllr Barrie Hargrove, Southwark's cabinet member for transport.

"We vigorously opposed the decision by Tory mayor Boris Johnson to scrap the proposal in 2008 and made it a commitment to fight for the Cross River Tram at the last election."

"However we could only give our backing to a company's scheme if we were confident that they would be able to deliver it. Given the fact that this company has never delivered a tram system before, doesn't have a business plan and hasn't got the money to build it, I can't see how we can have any such confidence in their scheme.

"I know the Liberal Democrats are excited about this scheme, but I'm worried they're just getting carried away by the pretty graphics."