An etching of Southwark Cathedral by Sir Frank Brangwyn is included in 'The Art of The Poster: a century of design' at the London Transport Museum. 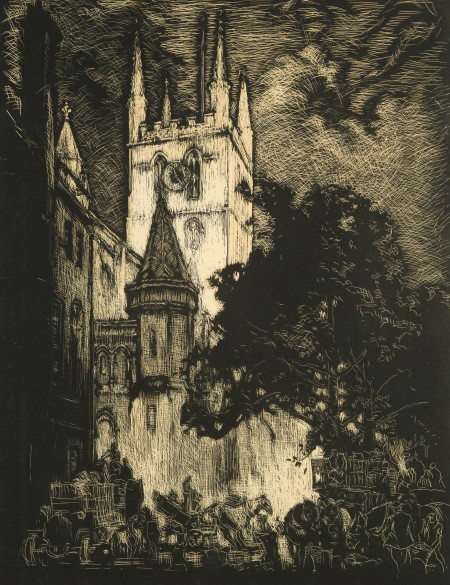 The image on display is a proof copy of Brangwyn's etching, drawn directly on to the plate, of the tower from the south-west. He was known for his realistic and life-like scenes such as a 1913 Docklands poster promoting Rotherhithe. Southwark Cathedral is set in a dark frame of trees making the building appearing lit by sun.

Brangwyn worked from a sketch made in Winchester Walk as the dawn sun appeared and in the remaining darkness below the depicts the mix of horse-drawn and motor carriers moving out of the market.

The work was for a poster issued in 1937 with the words: "Against the dark wharves of the Thames and over the roar of Borough Market rises the tower of the Cathedral, softly grey with weathering of centuries. Inside, away from the urgency of the streets, it is suddenly quiet under the high vaulting. You are in the oldest Gothic church in London."

It is interesting to see Borough Market, then purely wholesale, highlighted as an attraction worth travelling to. There is no east-west Jubilee Line so the text includes the advice that the Cathedral is a seven minute walk from Monument Station.

Also in the exhibition is a 1932 poster for the Imperial War Museum by Austin Cooper. It is striking for featuring a bomb, guns and ruins which could be of the Second World War. But it is looking back to the First and advertising the museum at its South Kensington location. Four years later it moved to its present address in Lambeth Road.

At this time another war seemed impossible. The exhibition has artwork for the 1936 Lord Mayor's Show panel poster by Edward Wadsworth which had to be withdrawn. His use of two modern weapons in the design for the show where the theme was 'Defence and Rearmament' was widely attacked in newspapers.

The exhibition marks a century of the poster on the Underground. Coinciding with the anniversary is the publication of a new book London Transport Posters: A Century of Art and Design by David Bownes and Oliver Green. Included are many of the posters in the exhibition although Brangwyn's Southwark Cathedral is not there.

However, the cover shows Paul Catherall's poster image of Blackfriars Bridge and St Paul's Cathedral from Oxo Tower Wharf. This is a view much favoured by artists and photographers. One of the earliest hangs in 10 Downing Street and occasionally the Prime Minister is interviewed on television standing in front of it.

The 2006 London Transport poster is by Paul Catherall and comes in four versions for the four seasons. When hung side by side the entire span of the bridge can be seen.

The Art of The Poster is at the London Transport Museum in Covent Garden until March; admission to museum and exhibition Ł10 (conc Ł8; Freedom Pass holder free).