Network Rail has submitted a planning application to create a new entrance to Waterloo East Station in Greet Street in a bid to relieve overcrowding. 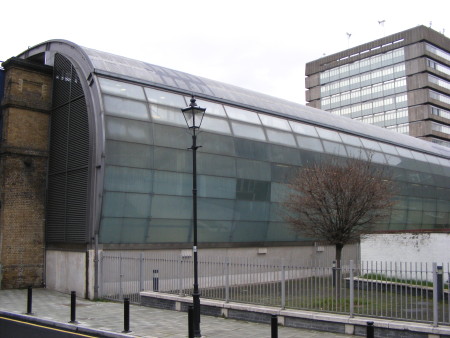 It is nearly 10 years since Southwark Station opened as part of the Jubilee Line Extension and brought with it a new interchange between the Underground and the mainline platforms at Waterloo East.

Pedestrian access to Waterloo East for passengers approaching from the Blackfriars Road end has always been problematic.

Whilst Travelcard and Freedom Pass holders can pass freely through both sets of ticket barriers to reach the mainline from Southwark Station's Blackfriars Road entrance, passengers with ordinary National Rail tickets have had to purchase a London Underground platform ticket or walk to Sandell Street to climb the steep flight of stairs.

Now Network Rail is proposing to create a new entrance on Greet Street immediately north of Tait House on a small patch of land currently owned by London Underground.

Network Rail estimates that 20 per cent of Waterloo East passengers would benefit from the new entrance and consequent reduced journey times.

The rail infrastructure firm says that an increase in passenger numbers on Southeastern trains to Waterloo East has led to overcrowding on the narrow high-level walkway between Waterloo East and the main concourse of Waterloo Station.