Three retired ladies who are making their way around London's bus network one route at a time took a ride on the 381 on Wednesday morning, stopping off at the London Councils offices in Southwark Street to meet the team that administers the Freedom Pass. 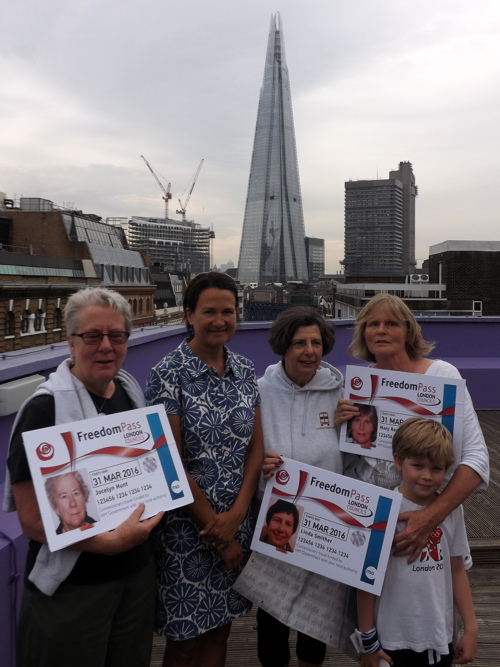 Jo Hunt, Mary Rees and Linda Smither embarked on their adventure in March 2009 with a trip on route 1 from Canada Water to Tottenham Court Road.

Their blog – London buses: one bus at a time – contains reports of all their journeys to and from the further corners of Greater London.

The Freedom Pass is funded by London's borough councils and administered by London Councils from its offices in Southwark Street – and the ladies were invited to visit the Freedom Pass team when they passed by on the 381 route from Peckham to Waterloo.

The self-styled 'Ladies Who Bus' were presented with giant personalised replica bus passes.

"This blog illustrates just how far a Freedom Pass will take you," said Cllr West.

"Rather than simply a means of getting from A to B, each bus route can be a journey its itself.

"The Ladies Who Bus have used their Freedom Passes to create a blog packed with informative, witty and entertaining observations of life aboard a bus from the start of the route all the way to the last stop.

"Many older and disabled people rely on their Freedom Pass to maintain their independence and boroughs are committed to continuing this cherished service."