Marie Phillips returned to Lower Marsh to launch her novel Gods Behaving Badly at Crockatt & Powell where she worked. 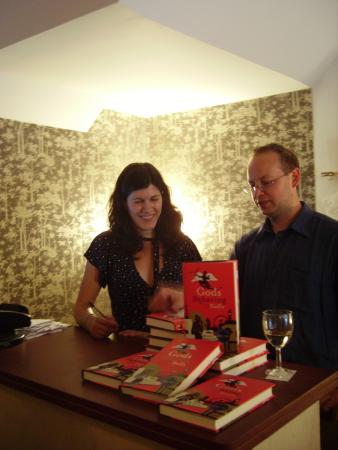 Crockatt & Powell has a special window display which on Wednesday attracted a large crowd for the booksigning.

Only last year, having written her first novel, Marie was working behind the counter at the Waterloo shop and wondering about finding a publisher. One customer was Scott Pack, former head buyer at Waterstones, who offered to read her book. He liked it and offered advice.

Then a publishing representative, on hearing about Marie's manuscript from Adam Powell, suggested that she send it to Dan Franklin at Jonathan Cape. She emailed her opening chapters and one Monday answered the phone in the shop to hear Dan make her an offer.

The novel, which features Greek gods turning up in modern north London, has already won highly favourable reviews from The Daily Telegraph and The Guardian. The book is currently The Tablet novel of the week.