Two cats featured on this week's Animal Rescue Live have found a new loving family on board HMS Belfast, but need new naval names to make them feel more at home. 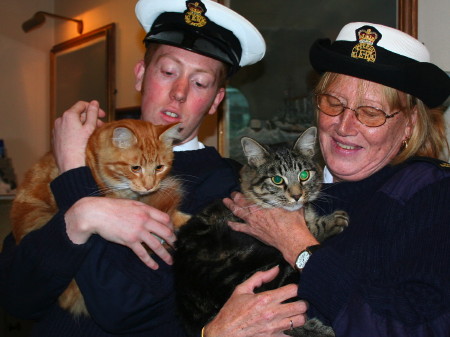 The two new shipmates, rescued from the Battersea Dogs and Cats Home, are sure to be popular with the thousands of families expected to visit the historic ship during the summer holidays.

"The ship is no stranger to looking after cats," explains director Brad King. "During her time at sea HMS Belfast would have been home to three cats all of which were an integral part of the crew, which during the Second World War could be as large as 950 men.

"They played an important role on board as rat-catchers and lucky mascots for superstitious sailors. We are delighted to play a part in restoring this naval tradition to the ship, and even more delighted to involve our visitors and supporters in naming our new recruits."

Visitors to the ship wishing to take part in the renaming competition can select from pairs of "nautical" names. Ten winners will receive special prizes for taking part. You can also vote online at www.iwm.org.uk/hmsbelfast

The cats, currently called Garfield and Diesel, will adopt their new names at the end of August.