The last of 14 restored cast iron fascias was lifted back onto Westminster Bridge this week, marking the end of a significant phase in the restoration of one of London's busiest bridges. 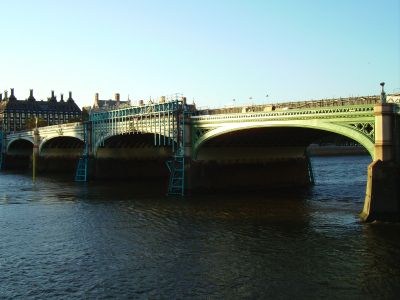 The fascia restoration, the largest phase in Transport for London's (TfL) project to protect of Westminster Bridge, has seen the 15-tonne fascias lifted by a 35-metre floating crane from the river.

TfL says that it has used modern engineering techniques to ensure that the features of the bridge are restored to meet the demands of its 21st century use while retaining its original character.

The existing decorative spandrels and shields have adorned the bridge since it first opened in 1862.

TfL took the decision to restore them while at the same time replacing the cast iron fascias that had suffered from being exposed to knocks from river traffic for many decades.

"London's bridges are iconic sites in themselves and have played an important role in London's history and growth," says David Brown, managing director of surface transport at TfL.

"Westminster Bridge is one of the busiest in the Capital and the works are vital to ensure it can meet modern demands.

"The fascias are a key part of the bridge's structure and it was important we restored them in what is one of London's most visited and photographed areas."

The restoration of the fascias began in 2003 and is part of TfL's Ł10 billion Investment Programme. The first two fascia panels were lifted into place last October.