A proposed leisure centre on the South Bank funded by a 43-storey residential tower was approved by Lambeth's planning applications committee on Tuesday night. 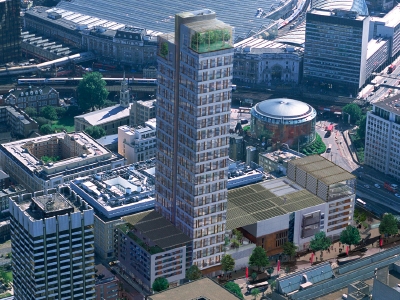 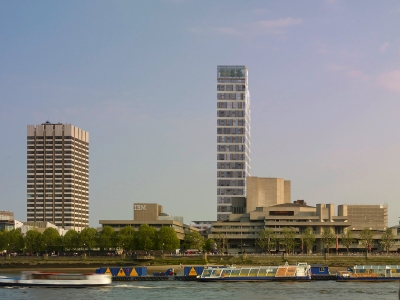 The tower seen from Victoria Embankment 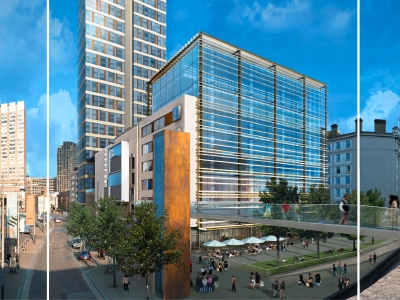 The sale of the 329 homes on the open market will help to fund the revenue costs of the leisure centre a much-requested community amenity in north Lambeth and north Southwark but which neither council can afford to provide.

At 144 metres the Doon Street Tower (originally proposed as a 172-metre tower) will be nine metres taller than the London Eye and three metres shorter than Multiplex's Strata tower at Elephant & Castle.

The residential building, leisure centre and office building are designed by Lifschutz Davidson Sandilands and the Rambert Dance HQ by Southwark-based Allies and Morrison.

The proposal has been controversial because of its impact on important views across Central London and English Heritage has pledged that it will seek to have the application 'called in' by Hazel Blears, secretary of state for communities and local government. The scheme also needs to be rubber-stamped by the Mayor of London.

Lambeth's planning applications committee backed the 144-metre residential tower and leisure centre application by two votes to one. Committee chair Cllr Toren Smith and acting vice-chair Cllr Neil Sabherwal voted in favour of the scheme, with Cllr Brian Palmer opposing and Cllr Florence Nosegbe abstaining. Votes on the Rambert Dance Company and the western office/educational building were passed by three to one.

The committee heard objections to the application from Robin Pembrooke on behalf of the Waterloo Community Development Group (WCDG).

WCDG's objections centred on the height of the tower – which Pembrooke told councillors will have a "negative impact" on the area around Waterloo – and the complete absence of affordable housing in the scheme.

Pembrooke criticised Coin Street Community Builders for failing to share the financial calculations which it claim justify the omission of the affordable housing element that would normally be expected in a market-led residential development.

WCDG's director Michael Ball also made a written submission to the committee which concluded that "...the proposals amount to overdevelopment of the site, as a result of an overambitious and unrealistic brief – the high densities, the lack of affordable housing, the lack of appropriate amenity space, the poor housing mix, the pinched residential spaces, the excessively high building and the uninterrupted slab straddling most of the site".

Ian Adams, chair of the Manor of Kennington Residents' Association, echoed the points made by Robin Pembrooke and described the proposed tower as "grotesquely high" and "aggressively tall". He went on to complain about an "attempt to cram as many things as possible into this extreme northern tip of the borough [of Lambeth]".

Iain Tuckett, group director of Coin Street Community Builders (CSCB), reminded the committee that the Doon Street site has been derelict for more than 50 years.

He told councillors that he understood their concerns about the non-inclusion of any affordable housing in the Doon Street proposals.

He explained that CSCB's most recent scheme – the Iroko Housing Co-Op – had brought 150+ children into the area which had serious consequences for local schools, childcare and sporting facilities.

"We cannot have more families moving into the area until we address these issues," he said.

He insisted that despite CSCB's background as a developer of family housing it had never – even in its 1980s campaigning days – seen the Doon Street site as suitable for family homes.

CSCB's "driving goal" in this scheme is the delivery of "community benefit" in the form of the leisure centre, he said.

Cllr Brian Palmer was unimpressed. "I'm afraid I can't support an application of this size with absolutely no affordable housing," he told colleagues.

Committee chair Cllr Toren Smith praised the "slim and elegant tower" and said that the development would "boost the South Bank cultural offer".

Other supporters of the scheme

Other objectors to the scheme

English Heritage warned in its submission that "the local community benefits would not outweigh the harm caused to nationally important parts of London's historic environment" including the setting of the Royal Festival Hall and National Theatre as well as views from St James' Park and Somerset House.

Design watchdog CABE last month published its design review of the scheme warning that it would 'highly compromise' Somerset House.

The committee also received a letter from four architects who worked with Denys Lasdun on the National Theatre building warning that views across the river from the Victoria Embankment will be "severely damaged" by the new tower.

The letter, signed by Gordon Forbes on behalf of his former colleagues Anthony Collins, Brian Perry and Adam Kawecki, calls for Lambeth Council and the GLA to agree an overall planning strategy for the South Bank: "Redevelopment should not just be allowed to happen fortuitously block-by-block, as this will inevitably produce a jumble of unrelated forms and uses."

Reaction to the committee's decision

"I'm obviously pleased," Iain Tuckett told to the London SE1 website at Lambeth Town Hall. "It's now got to go to the Mayor, and English Heritage will seek to have it called in. We're hoping that doesn't happen. If it does, we won't have any chance of of completing it before the Olympics.

"It would be a very good thing for the community to have some sort of obvious benefit by the time of the Olympics.

The financing of the scheme remains a stumbling block: "The banks will have to satisfy themselves that the scheme is one that they're prepared to come behind – and obviously since we talked to them there have been all sorts of changes in the market. That's inevitable.

"With a fair wind we are looking to complete the development in 2011. If we can offer to complete it before the Olympics then I think we can stand out as a project which Sport England perhaps would support – and that's really how it should be."

Tuckett says that the scheme will address a deficiency in local amenities in SE1 compared to other parts of London: "We hope that we have something that's useful whether you live or work in the area. It's part of our long-term plan to ensure that we have – in the heart of the South Bank – all the community facilities that people elsewhere have."

"We look forward to the South Bank continuing its regeneration because it's a fantastic place, we're all lucky to be part of it and we're very proud to be part of this scheme.

"Given the dominance of arts uses, it's very logical that there should be a major arts institution in that group of buildings, and it brings something that just isn't there."

Rambert had also been considering taking space in Oakmayne's proposed development on the Recall warehouse site in Bermondsey Street for its new HQ, but having secured planning permission at Doon Street it is now expected to embark on a major fundraising push to deliver the Allies & Morrison scheme.

Vital new leisure facility or blot on the landscape?