Proposals for a major redevelopment of the Shell Centre on the South Bank have been approved by Lambeth Council's planning applications committee. 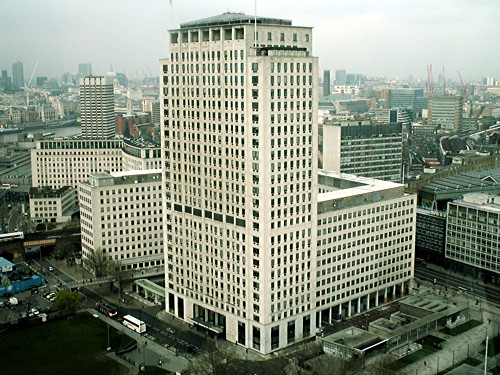 The current Shell Centre buildings seen from the London Eye

Councillors approved the scheme by three votes to two with one abstention after a hearing lasting nearly four hours at Lambeth Assembly Hall in Brixton.

The scheme has been proposed by Braeburn Estates – a joint venture of Canary Wharf Group and Qatari Diar – and masterplanned by Squire and Partners. Work is expected to start this year and be completed in 2019.

Apart from the Shell tower the existing structures on the site will be demolished and replaced with eight new buildings up to 35 storeys in height.

The buildings within the development have been designed by Kohn Pedersen Fox, Patel Taylor, Stanton Williams and Grid Architecture.

Architect Michael Squire said that the layout of the development was designed to deal with the "impermeable" nature of the current Shell campus.

"This scheme is all about reinventing the permeability, connecting Waterloo to the river and bringing Shell back to the South Bank," he said.

The project will create new offices for Shell's 4,000 London staff as well as speculative commercial space for a further 2,000 people.

The scheme includes up to 877 homes with 98 designated as 'affordable'. A further 70 affordable homes funded by the developer will be built in Lollard Street SE11.

The developer will also contribute Ł1 million to Coin Street Community Builders' proposed leisure centre at Doon Street in lieu of the swimming pool at the Shell Centre which is currently used by local schools and groups.

The committee heard from residents of County Hall and the White House who objected to 'overdevelopment' of the site and possible loss of daylight and sunlight.

Lambeth's decision to approve the scheme will now be referred to Mayor of London Boris Johnson.

Although not formally linked to the Shell Centre planning application, Braeburn Estates revealed on Tuesday that it has reached outline agreement with Southbank Centre to acquire the Hungerford Car Park site to create an extension to Jubilee Gardens.

"Lambeth is delighted the development of the Shell Centre site is going ahead as it will deliver much needed jobs, new and affordable homes and better open spaces," said council leader Lib Peck.

"We're very pleased that Shell has chosen to remain in the area and that as part of the scheme we've been able to negotiate a substantial amount of money for improvements to community facilities, which will include extended Jubilee Gardens by 2016."