Norton Rose in the limelight at Lord Mayor’s Show 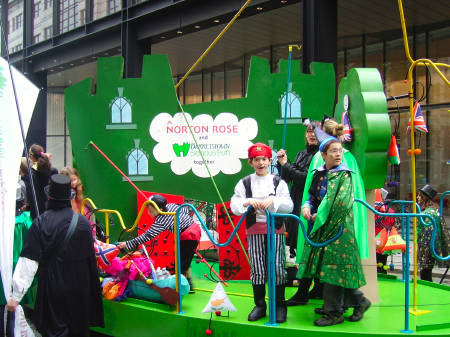 Norton Rose, who recently moved to the More London development near Tower Bridge, took part in the show for the first time this year because the Lord Mayor is a former partner of the practice. During his 37 years with Norton Rose, David Lewis founded and chaired the firm's Charitable Foundation – a registered charity funded by donations from partners – which is responsible for co-ordinating international donations and fundraising activities.

The Norton Rose float highlighted the law firm's connection to Barretstown, a charity for children with serious illnesses that helps children from 21 European countries rebuild their self confidence after traumatic treatment.

The float was based on Barretstown's castle logo and had a revolving line of little dolls on a zipline, one of the activities the children can do at Barretstown.

About 40 people – children and adults – took part in the parade including Norton Rose Group employees and their families and Barretstown volunteers.

Many of the costumes, dolls, flags and castle bricks will be sent to Barretstown after the show for the enjoyment of the children.

Based at a castle in Ireland, Barretstown it offers a fun programme of challenging activities designed to help children gain self esteem and coping skills. The programme is recognised by the medical community as playing an important part in a child's recovery.

Norton Rose Group teamed up with Barretstown in 2005 and is able to offer more than the financial support required to help get more children to Barretstown. Employees have volunteered at the camps, often as part of a team-building exercise, and undertaken activities such as painting the cottages where the children stay and creating a sensory garden.

"We like the approach Barretstown has to its work because it's simple, direct and effective and similar to how we do things at Norton Rose Group," says Patrick Farrell. "We like that synergy and above all, we like the idea of serious fun."