An architect who worked on the design of the National Theatre with the late Denys Lasdun has criticised plans for the 43-storey Doon Street tower next to the theatre at a public inquiry into the proposals. 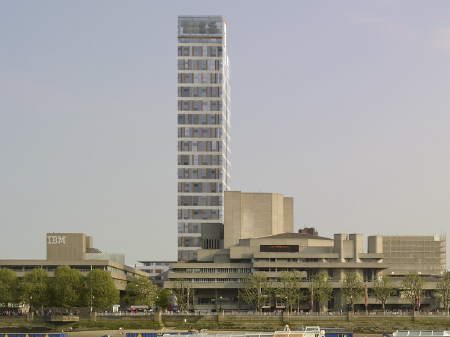 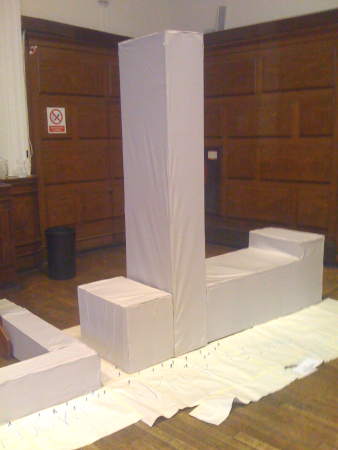 Objector Veronica Ball built this scale model of the proposal from 250 hand-cut pieces of wood. The adjacent Iroko housing co-op is shown on the left for comparison

Although most of the evidence heard at the three-week public inquiry into Coin Street Community Builders' plans for a leisure centre and 329 private apartments has centred on the scheme's impact on Somerset House and St James's Park, on Wednesday third-party objectors had their chance to air concerns about impacts on other local buildings as well as the complete absence of any affordable housing from the scheme.

Gordon Forbes was addressing the inquiry at Lambeth Town Hall on behalf of four of his former colleagues who also worked on the National Theatre building in the office of Sir Denys Lasdun.

He told the inquiry that, in designing the National Theatre, Lasdun has been "influenced by his regard for, and indeed, his strong admiration of, Somerset House, located directly opposite the Theatre on the north bank of King's Reach."

"The insertion of a new tall structure into the composition of bridge and buildings will change radically both the visual image of the theatre, and will damage the image in the public mind, of the theatre in its riverside setting.

"It will disturb Denys' carefully-considered concept of city life and theatre, and it will upset the image of the theatre in the cultural life of the nation.

"The theatre will no longer be seen as an integral part of the South Bank arts facilities, but as a building fronting a massive inland development, that has little relevance to it, and to which it becomes just an architectural base."

He added: "...it is difficult to imagine the French nation countenancing the idea that the setting of the Opera Garnier would be enhanced by a 38-storey [sic] tower immediately behind it, or that the Paris authorities would even consider allowing such a piece of urban design barbarism."

Mr Forbes – whilst expressing sympathy with the challenging brief presented to architect Alex Lifschutz – also questioned the oft-repeated assertions about the high quality of the design.

"Seen from the river, the Doon Street scheme is rather like a goods train assembled from wagons of different sizes and shapes according to their content and sequence in the phasing ...

"The educational and office building at the extreme right (west) end fulfils the role of the guard's van of the train, but fails to act as a visual counterweight to the tower, which by analogy becomes the extremely tall locomotive that has metaphorically and financially, the onerous task of pulling the whole assemblage along."

On the question of possible designs that would incorporate several less tall towers, Mr Forbes warned that these solutions "would give [the theatre] the appearance of being surrounded on its landward side by a range of stunted towers competing with it and with each other for prominence and attention."

Calling for the inspector recommend refusal of planning permission, Mr Forbes concluded that "the National Theatre building deserves to be protected from development so evidently out of scale with and careless of its surroundings".

On Wednesday the inquiry heard evidence from the Waterloo Community Development Group.

"WCDG supports the aspiration of the applicant for a publicly accessible subsidised swimming pool in Waterloo and improved gym and fitness facilities," director Michael Ball told the inquiry.

"But this aspiration does not outweigh the need for additional affordable housing in Waterloo, nor the requirement that all development improves rather than exacerbates the living environment through appropriate design, and we therefore cannot support this proposal."

Mr Ball went on to outline how Coin Street Community Builders came to obtain the land in 1984 as a result of a lengthy community campaign for affordable housing on the South Bank.

He explained that the heart of WCDG's opposition is that "a site secured by the community primarily for affordable housing (i) has been left vacant and undeveloped for 23 years is (ii) now proposed for everything but affordable housing."

Mr Ball also criticised the "murky" financial viability arguments put forward by CSCB: "Valuable land is extravagantly donated to Ballet Rambert. This has no historical or policy basis; is not part of any agreed masterplan; is unrelated to Europe's biggest arts centre adjacent; its benefits are uncertain."

Urging the secretary of state to refuse permission, Mr Ball concluded: "The proposals amount to overdevelopment of the site, as a result of an overambitious and unrealistic brief – the very high densities, the lack of affordable housing, the lack of appropriate amenity space, the poor housing mix, the pinched residential spaces, the excessively high building and the uninterrupted slab straddling most of the site."

WCDG founder-member Margaret Mellor, a veteran of the Coin Street public inquiries of the 1970s and 1980s, pronounced herself "shocked by the proposal before this inquiry".

Ms Mellor described the Doon Street proposal as "a betrayal of and insult to all those who campaigned so hard" in the 1970s and 1980s.

She presented a detailed analysis of the breakdown of housing types in Waterloo, including the reduction in affordable housing caused by the sell-off of former Peabody Trust and Church Commissioners' housing.

"The Waterloo community feels threatened now by the influx of high-cost private housing," she warned.

Veronica Planton, a Waterloo resident for 16 years who describes herself as a "community activist", also gave evidence to the inquiry against the Doon Street proposals.

"Coin Street Community Builders hold the land that they intend to use for the Doon Street development in trust on behalf of the Waterloo Community. CSCB came into being to hold, develop and administer this land for thie community and its primary remit is not to act as a commercial property developer.

Ms Planton also reminded the inquiry that the land had been secured by CSCB at a fraction of its commercial value as a result of a campaign "against the commercial development of office towers and hotels".

Ms Planton added: "The sellers, the GLC, created restrictive covenants on the site limiting its commercial development value, by requiring the purchaser to pay the seller the difference in value between the purchase price and the value of any new development – should any new use be allowed."

She quoted from the documents held by the Land Registry relating to the 1984 land transfer between the GLC and CSCB: "...wherever the permitted use shall be residential accommodation this shall at all times mean public sector residential accommodation let and managed subject to fair rent legislation as local authority or co-operative housing for persons in housing need."

Ms Planton went on to point out that Lambeth Council has around 11,000 households on its waiting list for council housing – and last year just 85 applicants were housed.

"It is clear that the Waterloo community is under attack from profiteers and cannot afford to lose the Coin Street land to property speculation," she concluded.

The inquiry heard evidence from Gareth Gwyn, a professional town planner, who had first become interested in the Doon Street scheme in his former capacity as planning secretary of the South Westminster Triangle Association. He explained that he was also giving evidence as a result of recent conversations with residents of the Iroko Housing Co-operative who "felt intimidated" and therefore "did not feel comfortable giving evidence" in opposition to Coin Street Community Builders.

He outlined a number of ways in which the scheme represents a departure from planning policy, which he said would set "an alarming precedent locally, at capital level and nationally."

Mr Gwyn warned that the new building would cast some homes in the Iroko co-op "into permanent shadow after midday in autumn and spring".

• On Friday the inquiry will hear closing submissions from Coin Street Community Builders, Lambeth Council and the GLA (who are jointly represented), English Heritage and the Royal Parks Agency.