Two wind turbines have appeared on the Southwark skyline this week as BT unveils a pilot renewable energy scheme at Colombo House. 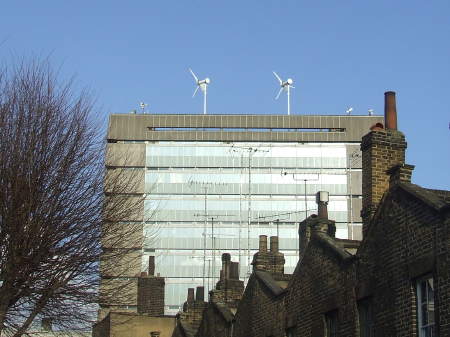 The pilot scheme centres on an installation of two 6kW micro wind turbines and a 15kW solar panel array on the roof of BT's Colombo House building on the western side of Blackfriars Road.

The wind turbines are mounted on nine-metre masts and are clearly visible from the street and surrounding buildings.

The turbines appeared on the roof of the 12-storey building on Sunday morning – to the surprise of some local residents – and were installed with the help of two very large cranes.

The scheme is part of BT's plan to reduce the company's UK carbon consumption by 80 per cent over the next eight years.

"We are always looking for ways to cut carbon, and renewable energy is an important part of our strategy," says Richard Tarboton, BT energy and carbon director.

"The pilot scheme at Colombo House is an important step in establishing the long-term viability of renewable energy generation in urban settings."

BT will be hoping that their renewable energy installation will be more successful than their neighbours across the road at Palestra.

14 wind turbines were installed on the roof of the headquarters of the Mayor's Climate Change Agency and operated for barely six weeks before they were recalled by the manufacturer.

Despite an announcement in January that a new type of turbine would soon be trialled at Palestra, nothing has yet appeared on the roof of the Will Alsop building that houses the London Development Agency and will soon host hundreds of Transport for London staff.