Tesco's proposal to install a large wind turbine in the car park of its Old Kent Road store hit a snag on Monday night when members of Bermondsey Community Council voted to defer a decision on the planning application. 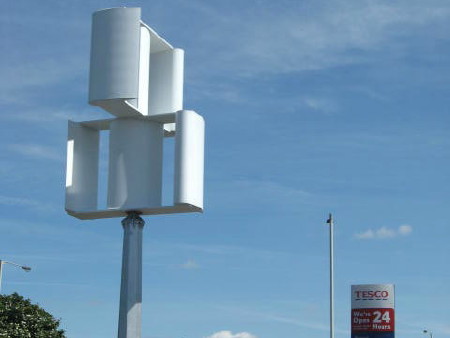 Photo of a similar turbine in Dudley by jo-h. Used under a Creative Commons licence.

Last year we reported on Tesco's planning application to install the 10.6-metre high vertically-driven wind turbine in the car park of the Old Kent Road supermarket.

The turbine has an expected life of 15 years and would generate enough power to supply four average households each day.

The proposed location is the centre of the mini roundabout between the Tesco petrol station and supermarket.

Although no local residents had objected to the proposal, planning officers referred the application for decision by councillors because of the size and visual prominence of the proposed wind turbine.

When councillors considered the application at the Ellen Brown Bermondsey Play Centre on Monday night the debate focussed on aesthetic concerns.

"Will I drive around it and think 'What a monstrosity'?" asked Cllr Paul Kyriacou, in whose South Bermondsey ward the Tesco store is located.

He added: "I just think this is going to look ugly". Cllr Kyriacou called for further discussions to be held with Tesco to see if a more "arty" design could be found.

Cllr Bob Skelly was sceptical: "You're never going to get a wind turbine with artistic merit," he said.

Cllr Anood Al-Samerai, chair of Bermondsey Community Council, spoke up in favour of the turbine: "It will create a talking point around renewable energy which is a good thing."

Council leader Nick Stanton asked whether the authority should be holding discussions with Tesco to see if the turbine's output could be connected to the forthcoming multi-service utility company (musco) which will provide power to regeneration schemes at Elephant & Castle and the Aylesbury Estate.

The community council agreed Cllr Kyriacou's proposal that the matter be deferred to allow further dialogue between Tesco and the council's planning department to see if the turbine's appearance can be improved.

No-one from Tesco or their agents was present at the meeting.

Recent wind turbine installations in north Southwark have not been entirely successful. The array of 14 turbines on the roof of the Palestra building in Blackfriars Road remains incomplete three years after the equipment was recalled by the manufacturer.

Meanwhile the turbines on the roof of the BT telephone exchange at Colombo House remain out of action after local residents complained about the loud noise.

Soon three turbines will be installed at the top of the Strata SE1 tower at Elephant & Castle.

Were the councillors right to call for a rethink?