Lib Dem mayoral candidate Brian Paddick has published a proposal for a £27 million tram link between Waterloo and Deptford along the Old Kent Road, following the 453 bus route. 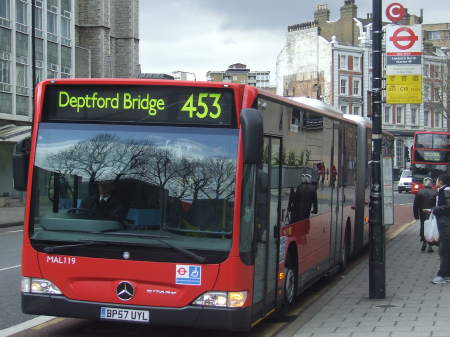 This line would, subject to local consultation, broadly follow the route of the current bendy bus route 453 from Waterloo Station to Deptford Bridge via Elephant & Castle, connecting at Waterloo with the Cross River Tram.

Paddick says that the 5-mile tram would cost just over Ł27 million.

Ultra Light Rail is new and much less expensive form of tram which does not require overhead wires or major highway excavations. ULR trams are much lighter rail-buses with their own power source on board, using cheaper pre-fabricated rail and point sections.

Paddick's team claims that their weight means that it is not necessary to move utilities under road surfaces when the tramway is built, hugely reducing costs.

"The details of the route would have to be worked out with local people but with many buses already full before they get halfway up the Old Kent Road, any proposals that add capacity, especially in the morning rush hour, would benefit local people," says Cllr Caroline Pidgeon, Lib Dem London Assembly candidate for the Lambeth & Southwark constituency.

The former Lambeth police commander – who lives in SE1 – has promised to make the Cross River Tram linking Camden Town with Brixton and Peckham his "top transport priority" and to build the scheme in full.

Last week we reported that a decision on the final route alignment of the CRT has been pushed back to 2009.

The Lib Dem mayoral candidate has also said that boat services on the river Thames should be brought into the Oyster card system.

On the question of the future use of the Waterloo International terminal which closed last November, Paddick says: "We must press for the platforms vacated by Eurostar at Waterloo Station to be made available for use by suburban commuter trains."

What do you think of Paddick's proposed tram?