Plans for a tram line across Waterloo Bridge are to be reviewed by the new Mayor of London Boris Johnson. 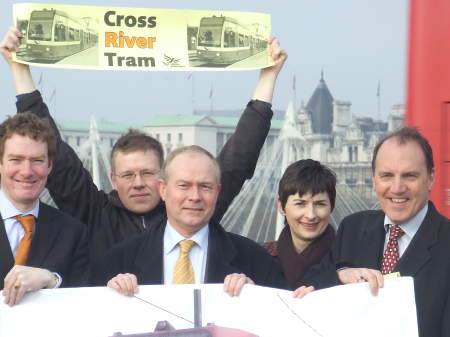 Responding to questions from London Assembly members Brian Coleman and Caroline Pidgeon, Mr Johnson said: "Cross River Tram (CRT) has been developed over a number of years by TfL in partnership with the local boroughs. There is currently funding in TfL's Business Plan up until 2010 to develop this scheme.

"However, there is no Government funding for implementation. In this light, I intend to review the transport, economic and environmental implications of CRT and form a view on the best way to proceed."

The tram would link Camden Town in the north with Brixton and Peckham in the south, travelling via Waterloo Bridge and Elephant & Castle.

Southwark Lib Dem councillor Caroline Pidgeon, who won a seat on the London Assembly at the start of this month, spoke of her "huge concern" about the Mayor's non-committal response.

"The proposal is extremely popular in communities throughout South London. As a new, inexperienced Mayor, he should be listening to what Londoners want.

"South London is in dire need of improved transport links. By crossing the river, the tram would also encourage new links between North and South London.

"The Mayor needs to work urgently with TfL to find a way to fund this much-needed scheme. Boris Johnson's refusal to make a firm commitment on the Cross River Tram is very disappointing. Liberal Democrats on the Assembly will continue to press the Mayor to make the tram a priority."

But Tory assembly member Brian Coleman called for Mr Johnson to pull the plug on the tram scheme which he described as "deeply unpopular".