Build a tram from Peckham to the Shard, says Southwark councillor

A Southwark councillor has suggested that the borough should consider developing a low-cost lightweight tram route based on a system in Portland, Oregon. 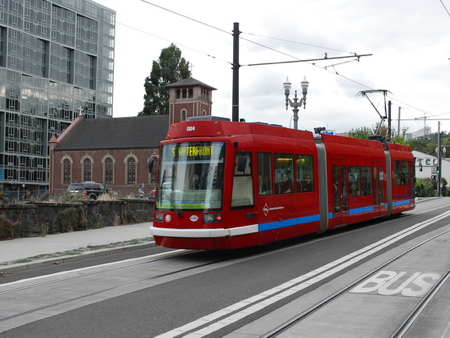 The Portland Streetcar shares some of its route with general motor traffic. (Photo: Lightpattern Productions)

He added: "This seems the perfect solution for a new tram from Peckham to Waterloo Station or even London Bridge (connecting with the Shard) via Elephant & Castle.

"The cost is such that even Southwark could choose to borrow the money for this on its own or use planning gain but it takes some big imagination and political will."

Plans for the Cross River Tram which would have linked Peckham and Brixton in the south with Euston and Camden Town – via Elephant & Castle and Waterloo – were axed by Boris Johnson when he became Mayor of London in 2008.

Both the Labour mayoral candidate Ken Livingstone and the Lib Dem contender Brian Paddick have pledged to resume work on the Cross River Tram if they take control of City Hall next month. Green candidate Jenny Jones has been a vocal supporter of the CRT but it is not mentioned in her manifesto.

Four years ago Brian Paddick proposed an ultra light rail tram line from Waterloo to Deptford along the 453 bus route via the Old Kent Road. Although his 2012 manifesto includes several light rail proposals this idea has not been revived for the current mayoral campaign.