A new play area at Ufford Street Recreation Ground in Waterloo is to benefit from the profit made by Marks & Spencer from its 5p charge for plastic carrier bags. 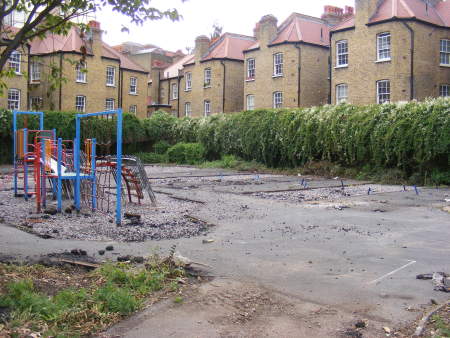 Work is under way in Ufford Street Recreation Ground

M&S began to charge customers 5p for food carrier bags in early May; the company says that by mid-July this had resulted in an 80 per cent reduction in the number of bags used – and generated Ł200,000 for environmental charity Groundwork.

Work recently began in the recreation ground between Ufford Street and Mitre Road in Waterloo to create a safe play area and community garden with new play equipment, seating areas and fencing.

Plans for the new play area have been developed by Groundwork London over the past two years. Work is expected to last for about 3 months.

M&S – which recently opened a Simply Food store on Bankside's Southwark Street – will be giving all its customers a free bag for life (normally 10p) with each food transaction from Thursday 21 August to Monday 25 August.