Four design teams have been shortlisted in the competition to create the new Waterloo City Square in the area around the BFI IMAX. 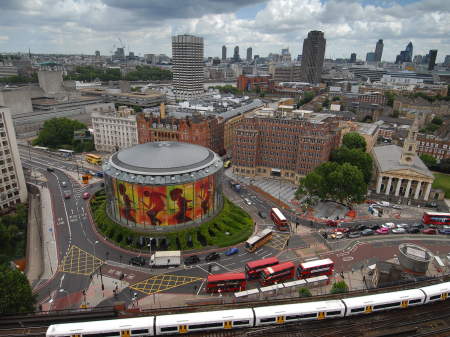 The roundabout around the BFI IMAX seen from Elizabeth House in York Road (Photo: Transport for London)

The Waterloo City Square contest was launched in November 2007 by South Bank Employers' Group with the aim of creating a unified public space to replace the series of complex and confusing subways currently circling the BFI IMAX.

Now four shortlisted design teams have been selected to progress to the second and final stage of the competition.

The Waterloo City Square is part of the vision for the redevelopment of Waterloo set out in the Waterloo Opportunity Area Planning Framework published by then-Mayor Ken Livingstone last autumn which designated the railway station as a suitable location for tall buildings.

It remains to be seen what attitude Boris Johnson's City Hall regime will take to the broader regeneration of Waterloo, but he has already signalled his opposition to the planned P&O skyscraper development in York Road.

"The plan to create Waterloo City Square is exciting and ambitious," says the London Development Agency's Peter Bishop, chair of the judging panel.

"The open competition attracted an extremely high level of interest. We are confident that each of the four finalists will develop ideas which will challenge our perceptions of the site and excite and inspire local communities, commuters and Londoners as well as the international audiences who know and visit the South Bank."

South Bank Employers' Group is responsible for delivering the project and their chief rxecutive Ted Inman says: "This project is crucial in terms of linking the riverside area, which is largely regenerated, with the rest of Waterloo and Blackfriars which is still in need of major investment and public realm improvement."

The first stage of the competition, based on written submissions and interviews, was used to assess the creativity, experience, technical ability and financial standing of entrants. The shortlisted teams will now be tasked with preparing concept designs in response to a detailed project brief and evaluation criteria.

There will be a public exhibition this winter at which the design teams will present their concepts and take questions. Information will also be available on the Waterloo City Square website.