Tesco has withdrawn a planning application to redevelop its Old Kent Road store after the plans were criticised by the Elephant & Castle regeneration team and the Mayor of London. 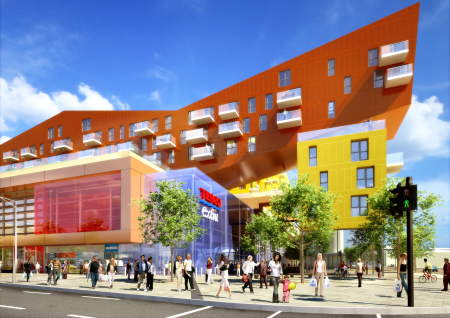 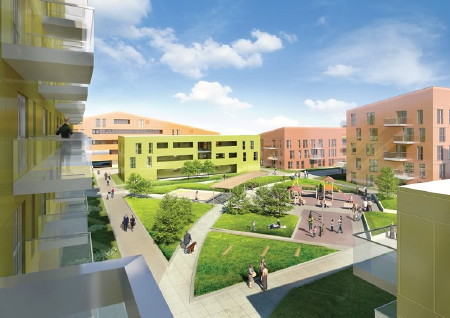 In June Tesco submitted a planning application to redevelop its site bounded by Old Kent Road, Dunton Road, Mandela Way and Humphrey Street to include 369 new homes and a vastly expanded superstore.

The decision to withdraw the application has been taken in the past few days. On Monday Tesco and architects BDP presented their proposals to local residents at a meeting of Bermondsey Community Council where the reception was generally hostile.

This week it emerged that the Mayor of London's initial representation on the scheme indicates that the scheme does not comply with the London Plan because it is not located in a designated retail centre.

"Insufficient justification has been given for the location of a retail development of this scale in this out of centre location," wrote GLA planning officers in their report to the Mayor.

Despite "the fundamental unacceptability of the retail proposal", officers noted that the design would "provide a bold and welcomed change to the environment of Old Kent Road".

Transport for London has criticised the proposed increase in shoppers' parking from 290 to 563 spaces, citing the risk of increased traffic congestion.

A threat to the viability of Elephant & Castle?

Perhaps unsurprisingly Somerfield and Morrisons have both tabled strong objections to the proposed expansion of Tesco, but it is the protests by the Elephant & Castle regeneration partners that will carry most weight.

A letter from Michael Fox of planning consultants Tibbalds outlines the fear of Southwark's own Elephant & Castle regeneration team that Tesco's proposals "will undermine the regeneration objectives the Council has for this key centre and the role it plays in the retail hierarchy".

The letter argues that the Elephant & Castle regeneration process could accommodate a major new superstore but without the level of car parking envisaged by Tesco at the Old Kent Road.

In a separate letter Lend Lease, the council's prospective development partner, argues that Tesco's proposal "will undermine the retail function and consequently the viability of the Elephant & Castle regeneration project".

Tesco's proposals have been broadly welcomed by Government design watchdog CABE, which says that "this proposal has the makings of a successful model of residential development above a food superstore", although it criticised the podium-level amenity space, likening it to "the left-over spaces characteristic of 1960s housing estates".

Southwark planners have also received a 113-signature petition from residents of the Astley Estate on Rowcross Street warning that the proposal represents "dire overdevelopment of the area".

Tesco "very much committed" to redevelopment

"We are very much committed to progressing the plans to redevelop the Old Kent Road store," says James Wiggam, corporate affairs manager for Tesco.

"Local support has been overwhelmingly positive and we would like to thank everyone that has registered their backing. At last summer's public exhibition, 84 per cent of shoppers and residents positively commented on the scheme and told us they welcomed the principle of creating a better store and providing new housing.

"However, following discussions with some groups we are keen to relook at certain aspects of the scheme and how the development can further benefit the local community.

"The plans provide a fantastic opportunity to regenerate the Old Kent Road. We want this development to act as a catalyst for further investment in the area, which is why we are keen to continue discussions with stakeholders over the coming months before finalising the plans."