Opposition to Thames Water's plans to use Alfred Salter Playground in Druid Street and King's Stairs Gardens in Rotherhithe for the construction of the Thames Tunnel 'super sewer' continues to grow. 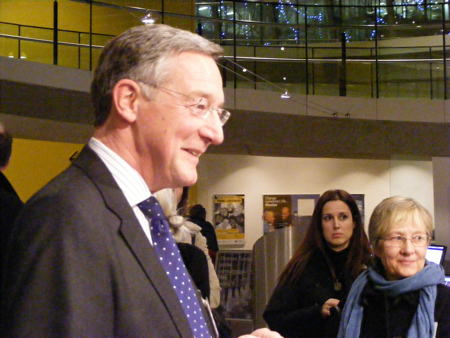 In September Thames Water launched a public consultation on its plans to create a new 'super sewer' tunnel under the Thames to reduce the amount of sewage that is released into the river.

The company's proposals to take over several open spaces, including two in Southwark, for the construction of the tunnel have provoked a strong reaction.

More than 20 members of the Save Kings Stairs Gardens Action Group staged a demonstration outside City Hall as the Thames Tunnel public exhibition closed.

The Rotherhithe residents came on Wednesday evening for the last hour of the consultation to stress their opposition to the temporary closure of their riverside park and the construction of a permanent shaft.

"I am sympathetic to your case but we have to have an alternative," said Thames Water sustainability director Richard Aylard who spent almost an hour answering questions inside City Hall.

He said that Thames Water was "actively involved in finding an alternative" but declined to name any sites under consideration.

On Monday more than 30 9-11 year-olds from St Joseph's Primary School in Gomm Road met Phil Stride from Thames Water to express their dismay at the proposals. They handed him a 4,000-name petition calling on his company to find an alternative to the park.

"I was impressed by the thought and effort the pupils had put into their visit. They raised some important issues that we will be reviewing in the run up to phase two of our public consultation next summer."

Speaking on Tuesday night Richard Aylard, who was presented with a campaign badge reading 'Brownfield Not Greenfield', insisted that it would be unfair to name any other possible location under consideration until investigations were complete.

On Tuesday afternoon Southwark's cabinet agreed the council's draft response to Thames Water's public consultation which has been extended until mid-January.

Cllr Fiona Colley, cabinet member for regeneration, stressed the importance of reducing the amount of sewage discharged into the river.

"We strongly object to these disgraceful proposals, which we believe will have an unacceptable impact on local residents and are contrary to a wealth of planning policies."

Papers circulated in advance of the cabinet meeting show some of the sites previously ruled out by Southwark Council as part of an earlier consultation in 2009.

Sites around Shad Thames pumping station were also considered as an alternative to Alfred Salter Playground.