St George, new owner of the One Blackfriars skyscraper project, is planning changes to the approved scheme, including the elimination of the public sky deck at the top of the proposed tower. 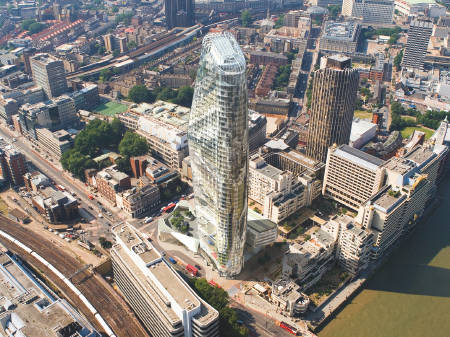 Beetham's proposal for a 51-storey tower at the southern end of Blackfriars Bridge was approved in 2009 by the then communities secretary Hazel Blears after a public inquiry.

After Beetham and its Russian partner Mirax hit financial difficulties the site was put up for sale and has now been acquired by St George – part of Berkeley Homes – which is planning to build the tower to the approved design by architect Ian Simpson.

Over the Christmas holidays new St George-branded hoardings appeared around the site which is bounded by Blackfriars Road, Stamford Street, Rennie Street and Upper Ground and has been vacant for nine years.

The new developer plans to alter the mix of uses in the scheme, relocating the planned luxury hotel into the lower-rise buildings planned for the site and filling the main tower with 280 luxury apartments.

One of the selling points for Beetham's scheme was that a publicly accessible sky deck would be provided at the top of the tower. Figures submitted as part of the planning application showed that up to 800,000 visitors a year were expected to enjoy the panoramic views of central London.

The Mayor's London Plan says that "tall and large buildings should incorporate publicly accessible areas on the upper floors, where appropriate".

However, towers that are wholly residential, such as Strata SE1 at Elephant & Castle, are not usually expected to offer public access.

Therefore St George's latest proposals have eliminated the sky deck, depriving Londoners of the opportunity to enjoy views from the top of the tower which will be located equidistant between the Palace of Westminster and Tower Bridge.

It should be noted that the original plans for the Beetham Tower were drawn up at a time when there was uncertainty as to whether the Shard – which will offer public access – would ever be built.

It is unclear whether two similar high-level viewing galleries just a mile apart would be economically viable as visitor attractions.

• St George has announced that a public exhibition of the revised proposals will be held at the London Nautical School in Stamford Street on Monday 23 January between 5pm and 8pm.

• There are further indications that after several years of stagnation the Blackfriars Road skyscraper boom is back on: work will start this month on the 20-storey tower at 240 Blackfriars Road with completion due in early 2014.