Plans for a 51-storey tower at the southern end of Blackfriars Bridge have been approved by communities secretary Hazel Blears. 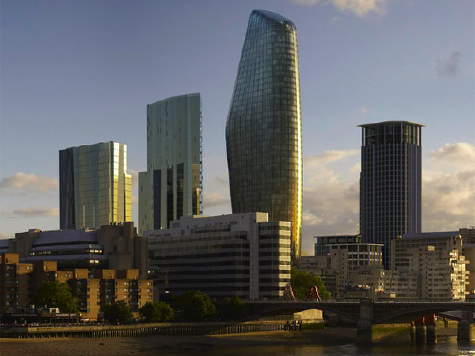 Image showing the cumulative impact of the proposals. The two towers at 20 Blackfriars Road are on the left. On the far right is the (unimplemented) extension and recladding of King's Reach Tower. Image courtesy Hayes Davidson.

The Russian-backed Mirax-Beetham tower at 1 Blackfriars Road and the Israeli-backed 20 Blackfriars Road development with towers of 23 and 42 storeys were the subject of a public inquiry last autumn.

The Mirax-Beetham Tower designed by Ian Simpson is proposed for the site bounded by Blackfriars Road, Stamford Street, Rennie Street and Upper Ground. It would include an 261-room luxury hotel and 96 apartments. A publicly accessible skydeck at the top of the tower would provide stunning views of London.

The 20 Blackfriars Road scheme by Wilkinson Eyre includes a 42-storey residential tower and 23-storey office tower along with further buildings of up to seven storeys on the site bounded by Blackfriars Road, Stamford Street, Paris Garden and Christ Church Garden.

Westminster City Council and the Royal Parks Agency argued strongly against the proposals, along with Waterloo Community Development Group.

Although the Mayor of London was not a party to the inquiry, Boris Johnson's deputy Ian Clement sent a letter to the planning inspector urging him to recommend refusal of the "unacceptable" towers.

This week communities secretary Hazel Blears announced that she endorsed the recommendation of planning inspector John Gray that both schemes should be granted planning permission.

The minister has effectively cleared the way for a wholesale redevelopment of the northern end of Blackfriars Road, but it remains to be seen how quickly the schemes will actually be built in the current economic climate.

The decision is especially good news for developer Beetham as the future of the company seemed to hinge on the secretary of state's decision.

"This is a much-needed boost to London," says Beetham chairman Hugh Frost. "The development is a vital part of the regeneration of the south bank of the Thames, creating an iconic landmark and tourist destination, as well as providing jobs and a total transformation for the area."

But Michael Ball, director of the Waterloo Community Development Group, strikes a more cautious note: "Despite the secretary of state's decision it is very unlikely that these are going to be built in the foreseeable future due to the credit crunch, which therefore means that sites which have lain vacant or derelict for over a decade will continue to blight the area for at least the coming decade."

According to the decision letter issued by the Department for Communities & Local Covernment, Hazel Blears:

• "agrees that the proposal would not have a harmful effect on the view from the footbridge in St James's Park, or on the character and appearance of the Royal Parks Conservation Area"

• "agrees that the appearance of both schemes in the view from the footbridge in St James's Park would give a stronger impression of the modern city beyond the Park than either individually, but still without dominating or overpowering the short-range view"

• "agrees that objections to the proposal are weakened when one takes into account permitted developments in the City, even more so if one takes Doon Street into account"

• "agrees that the housing provision in both proposals would contribute towards a more mixed and balanced community, and that the overall amount of affordable housing for both proposals is acceptable"

• "considers that ... the design of both buildings would be of a high quality, inclusive and sustainable design which would improve the character of the area and produce attractive public spaces"

Next month another public inquiry gets under way to consider proposals for three high-rise buildings next to Waterloo Station.