Plans for a 13-storey development including a ballet school and student accommodation for nearly 300 people in Hatfields were rejected by Southwark councillors on Tuesday. 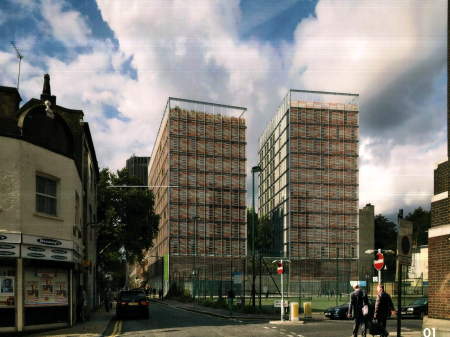 The proposed towers, likened to two pieces of Weetabix by one councillor, seen from the junction of Hatfields, Roupell Street and Meymott Street 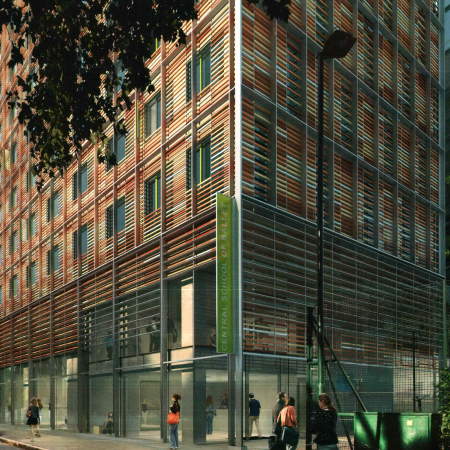 Student accommodation provider Hive and the Central School of Ballet want to develop a derelict site between Hatfields and Paris Garden – immediately north of the Colombo Centre's tennis courts – to include bed spaces for 291 students from local universities and dance studios for the ballet school.

Last October we reported the original proposal for two timber-clad buildings of 17 and 14 storeys designed by local architects Allies and Morrison. This application was withdrawn after a negative reaction from Southwark Council's planning officers.

A new application was submitted in the summer with the heights of the two towers reduced to 13 and 11 storeys and the number of student bed spaces reduced from 335 to 291. The timber cladding of the original design was replaced with terracotta batons.

Councillors heard from three representatives of the Friends of Hatfields Green which has been working to improve the run-down green space on the western side of Hatfields immediately opposite the proposed towers. Zoe Kennedy outlined the group's objection that the proposed development is out of scale with its back street surroundings and will put extra pressure on already scarce local amenity space.

Bruce Sansom, director of the Central School of Ballet, explained his organisation's need to move from its current Clerkenwell home and his keenness to make the school's work accessible to new audiences south of the river. The main ballet studio would be visible from the street and would provide an insight into the creative process not normally seen by the public. Sansom drew a parallel between the public visibility of his proposed dance studio and the ability of passers-by to see footballers at work on the Hatfields pitches across the road.

Cllr David Hubber condemned the design as "rather boring to put it mildly". He went on to liken the towers to "two pieces of Weetabix stuck on their ends".

Cllr Robin Crookshank Hilton also called on the applicants to rethink the "faceless" design. "I don't think this is ready yet," she said.

The scheme's only supporter on the planning committee was chairman Cllr James Gurling, who said that "buildings like these have a real role in rejuvenating society". He added that he was "extremely pleased" with the reduction in height from the original design.

Members voted 4 to 1 against council officers' recommendation to grant planning permission on the grounds of excessive height and the lack of differentiation in the design.

The Greater London Authority's planning officers had also criticised the uniform design of the two towers but unlike Southwark's councillors they would welcome a slightly taller tower to maximise the use of the site.

The applicants will now have to decide whether to produce a revised design or to appeal the council's decision.