The Mayor of London Boris Johnson has said he is a fan of trams and that his mind is not yet made up on the fate of the Cross River Tram, according to Liberal Democrat politicians who met him this week. 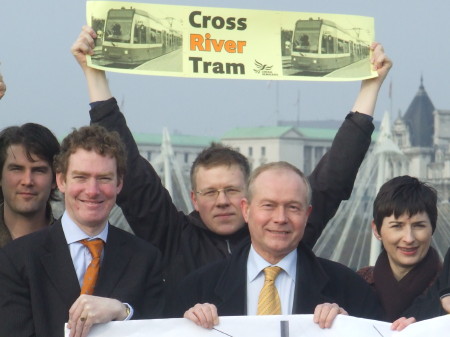 Members of the Cross River Partnership, a grouping of businesses and councils on either side of the Thames in central London, met Mr Johnson on Tuesday to press the case for the Cross River Tram (CRT).

The CRT would link Brixton and Peckham in the south with Camden Town and King's Cross in the north, crossing the Thames at Waterloo.

The fate of the Ł1.3 billion scheme is currently in the hands of the Mayor, who as chairman of Transport for London has the final say on whether further development work on the scheme is included in TfL's new business plan which is currently being prepared.

"We were pleased to hear he'll work with boroughs to ensure all the options for this project are worked through before any final decision is made."

Lib Dem London Assembly member Caroline Pidgeon – who is also a Southwark councillor – added: "It was a really productive meeting and the Mayor made a lot of positive noises about the Cross River Tram proposals.

"The Mayor needs to know there'd be a huge cost to London if the plan were to be dropped both in terms of vital regeneration and the lost opportunity of greatly enhancing the capital's transport infrastructure.

"I'm also pleased he's not averse to the possibility of levering in private sector finance."

Mr Johnson's apparent willingness to keep his options open is in contrast to the stance of Conservative London Assembly members who have called for the tram proposal to be axed.