State-of-the art photovoltaic solar panels are to be installed on City Hall as part of a scheme approved by Southwark Council's planning committee. 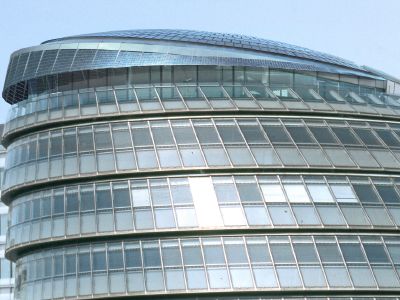 The photovoltaic system has been specially designed to complement the rounded shape of the Foster and Partners designed building. The panels will provide 70kW of renewable energy, generating 3.1million kWh of renewable electricity over their lifetime. The panels will reduce the CO2 emissions of City Hall by 3,000 tonnes in its lifetime – enough to fill 3,000 hot air balloons.

City Hall already incorporates a number of sustainable features including the building shape itself to reduce solar gains. The building is naturally ventilated, with windows in all office spaces that can be opened, whilst heat generated by from computers and lights is recycled. Electrical consumption is reduced by avoiding refrigeration and uses ground water to cool air in the building. The water is extracted from the water table beneath London through two bore-holes. This is used to cool the building and then used in toilets and for irrigation savings on mains water.

The project will be funded and implemented by the London Climate Change Agency which was set-up by the Mayor of London last year. It has also received a grant from the Department of Trade and Industry. Mayor of London Ken Livingstone describes the need to reduce carbon emissions as "the biggest challenge facing humanity".

"The installation of photovoltaic cells on the roof of City Hall completes the building as originally designed," says Grant Brooker, senior partner at Foster and Partners.

He adds: "The installation is the most apparent and physical manifestation of the building's sustainable design agenda. We totally support the Mayor in his goals and we hope that City Hall will act as an inspiration to others designing sustainable buildings in our capital."

Allan Jones, chief executive officer of the London Climate Change Agency, explains that the City Hall scheme is the third in a series of flagship projects that the agency is undertaking: "...the first being the photovoltaic system at the London Transport Museum and the second the photovoltaic roof and building integrated wind turbines at Palestra.