A book looking at the first ten years of Shakespeare's Globe has been launched at the theatre. 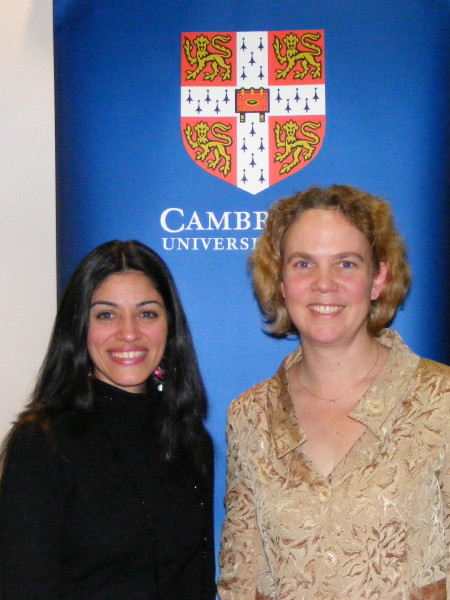 Farah Karim-Cooper and Christie Carson at the launch party

Shakespeare's Globe: A Theatrical Experiment provides the first-ever study of the role of Globe Education which existed more than decade before the present Globe theatre was built.

Actors, educationalists, designers and scholars look back on the project in this book edited by Christie Carson, English lecturer at Royal Holloway, University of London, and Farah Karim-Cooper, head of courses and research at Globe Education.

"This project was built out of real tenacity overcoming some incredible obstacles over many years," recalled Globe Education founder and director Patrick Spottiswoode, who welcomed guests.

In his own chapter in the book, Patrick Spottiswoode writes of the early days of Globe Education during the 1980s when visitors to Bear Gardens were confronted by an eight foot bear which had come from the National Theatre. He also highlights the role of Debra Callan, now head of Globe Education and head of events, who was one of the pioneers at the Bear Gardens warehouse.

Patrick Spottiswoode knew the Globe's founder Sam Wanamaker well and describes him as a maverick and the Globe as "a maverick idea".

"Sam was always insistent that the Globe should remember its Southwark community. It is now home to hundreds of diverse communities and so our challenge is to engage with all sectors of our constantly evolving multicultural community."

Former artistic director Mark Rylance, in an interview for the book, claims that Shakespeare's Globe is "the most experimental theatre space in England".

Speaking at the launch party, Christie Carson described the reborn theatre as a place of self-reflection. "Shakespeare's Globe is about processes, not about products. It's about dialogues, not monologues. It's about experiences."

Farah Karim-Cooper said it was appropriate for the book to be published by Cambridge University Press since she and Christie had decided to do the book whilst attending a conference in Cambridge.