A German-style Christmas market has opened on the South Bank between Waterloo Bridge and the London Eye.

Angela Spizig, deputy mayor of Cologne, at the opening of the market on the South Bank 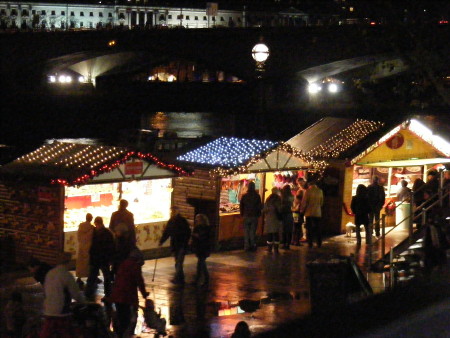 The market features around 40 kiosks selling gifts and seasonal food and drink. There is also the opportunity to meet Father Christmas at 'Santa's Secret Village'.

"I've been here before – in the summer – with my husband, but I never dreamed that I would be here opening a Christmas market.

"Cologne is a young and an old city on a big river – the Rhine – like London, except that we only have one million inhabitants. But we're just as [ethnically diverse] as London: our people come from 180 different nations. But they all love the Christmas traditions."

Mrs Spizig spoke about the Christmas market which takes place outside Cologne Cathedral which houses the relics of the three wise men believed to have visited Bethlehem soon after Jesus's birth.

"If you like this Cologne Christmas Market here in London, why don't you come over to Cologne some day to see the original?"

There is a prize draw taking place at the market where visitors can win flight tickets to Cologne.

"We very much hope that its the start of an enjoyable and productive relationship between Lambeth and Cologne," says Cllr Lib Peck, the borough's cabinet member for housing and regeneration.

"We're very lucky in Lambeth to have such a fantastic centre in the South Bank. I always consider it the real heart of London."

She added: "Lambeth has a real rich tradition of markets. Brixton is well-known for its iconic market. And just round the corner in Lower Marsh there has been a very traditional market for a long time. I'm very pleased that some of the traders from there are here.

• The German Deli in Park Street, Borough Market, has recently reopened after a short closure for Thameslink Programme preparatory works by Network Rail.