A sign warning dog owners of a 'curse' on Leathermarket Gardens was installed in the park last week but has since disappeared. 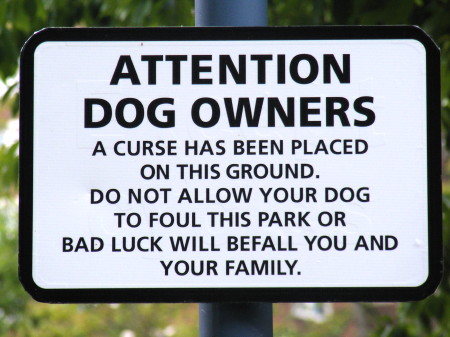 The sign, which appeared at the Tyers Gate entrance to Leathermarket Gardens, said: Attention dog owners – a curse has been placed on this ground. Do not allow your dog to foul this park or bad luck will befall you and your family."

By Friday afternoon the sign had vanished. A Southwark Council spokesman was unable to shed any light on the mystery of the sign's installation or its disappearance.

Although the 'curse' sign was clearly unofficial, the council has shown itself to be capable of producing signs with a sense of humour such as the literary quotes on the Bankside signs warning against busking and street trading.

In 2007 the council found itself in dispute with the borough's dog owners when it installed signs in local parks requiring dogs to be kept on leads. The council later admitted that the signs were 'misleading' and did not match up with parks bylaws.

More recently the council has run a series of roadshows in local parks to encourage responsible dog ownership.