Updated: Nine pupils at the London Nautical School in Stamford Street have tested positive for swine flu, it was revealed this week. 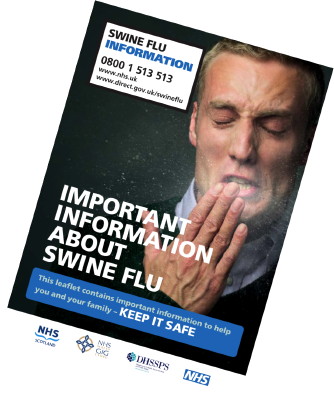 The Government has circulated a swine flu information booklet

According to a letter circulated to parents and staff by the Health Protection Agency and Lambeth Primary Care Trust on Wednesday, "one pupil in the school has tested positive for Influenza A/H1N1V otherwise known as 'swine flu' and several more children with similar symptoms are presumed to have the same illness".

The letter continues: "There is an increasing number of 'swine flu' cases in the wider community outside school. We are not therefore advising closure of the school or the issuing of preventative anti-virals for all children and staff at this stage.

"As there have been quite a large number of children in the school with flu-like illness, it is likely that transmission has already occurred and therefore closing the school at this stage is unlikely to stop the spread of this infection."

On Friday the school confirmed that there have been further cases of swine flu among pupils this week. One parent told the London SE1 website that nine pupils have been affected.

Parents of children with flu-like symptoms have been advised to keep their children at home and avoid mixing with others.

The London Nautical School, which is a boys' secondary school, has cancelled its annual regatta which was due to be held on Friday.

Elsewhere in Lambeth eight year six pupils and a teacher from Immanuel and St Andrew Primary School in Streatham were taken ill after a trip to Surrey.