One of the London Eye's 32 capsules was towed down the river on a barge on Friday afternoon after an overnight operation to remove it from the South Bank observation wheel. 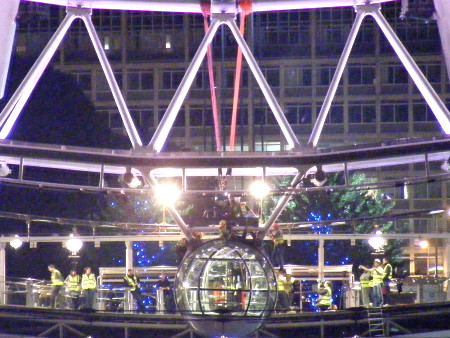 A plain white dummy pod has been added to the wheel The capsule is towed past Waterloo Bridge late on Friday afternoon 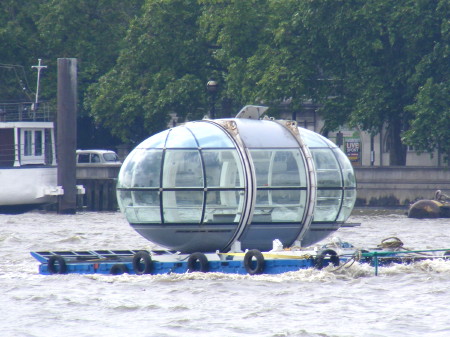 Merlin Entertainments had planned to carry out the work on Tuesday night but the operation was abandoned at the eleventh hour.

The capsule was lowered onto a barge that had been positioned beneath the wheel in the early hours of Friday morning.

The operation had to be planned carefully to fit the tide times – the loaded barge must pass under the access ramps to Waterloo Millennium Pier at low tide, but craft can only enter and leave the enclosed area of water around the wheel at high tide.

A non-passenger-carrying replacement capsule has been added to the wheel.

Over the next three years each of the 32 capsules will be removed in turn and taken to Tilbury Docks by barge and then on to Worcester by road for major refurbishment.

Merlin Entertainments hopes to complete the work in time for the 2012 London Olympics.