Which parts of SE1’s heritage does English Heritage say are ‘at risk’?

Waterloo Conservation Area is 'at risk' from inappropriate development, warns English Heritage in this year's Heritage at Risk register published last week. Three previously 'at risk' SE1 buildings have been removed from this year's register. 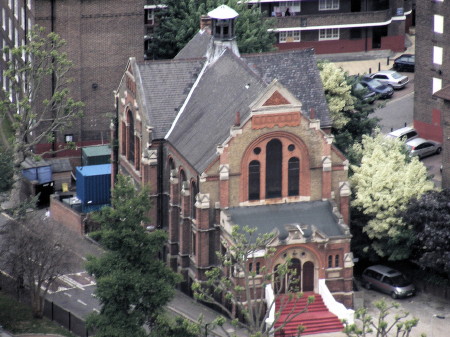 No longer at risk: the old Welsh Presbyterian Church in Falmouth Road

Last year English Heritage launched its Heritage at Risk register to replace the former Buildings at Risk scheme for listed structures deemed to be in a poor condition and widened its scope to include parks and gardens as well as shipwrecks and battlefields.

For the first time the 2009 register includes a section on conservation areas based on questionnaires returned by council conservation officers.

Waterloo Conservation Area, which covers the area from St John's Waterloo in the west to the Peabody Estate in the east, is one of two Lambeth conservation areas highlighted as being at risk from inappropriate development.

"We value the borough's heritage and the role and importance of its conservation areas, and we are committed to monitoring and protecting these valued local jewels – including the Waterloo Conservation Area," said a Lambeth Council spokeswoman.

"We have taken planning enforcement action to safeguard the area within the past three years and we have updated the Conservation Area Appraisal and Management Plan for Waterloo following public consultation.

This document will help inform any work carried out locally and is intended to ensure that the area is protected for future generations to enjoy."

Once again the largest cluster of 'at risk' buildings in SE1 is around St George's Circus and on both sides of London Road where there are stabilised but still unused Georgian terraces belonging to London South Bank University.

Also highlighted in Bermondsey are several tombs in St Mary Magdalen churchyard and the Tanner Street Park drinking fountain which is the 1738 top to the tower of the demolished St Olave's, Tooley Street.

The clock tower of Henry Wood Hall in Trinity Church Square is described as needing "extensive repair". Concern is also expressed concerning the condition of the railings, walls and gates of the former St Mary's Church, now the Garden Museum, next to Lambeth Palace.

Three buildings which appeared on the 2008 register do not feature this time round: the Church of the Brotherhood of the Cross and Star in Falmouth Road and houses at 154 New Kent Road and 36 Gladstone Street have all been removed from the listings.