Plans for a new high-speed rail link between London and Manchester could strengthen the case for a Cross River Tram in central London, according to Southwark Council leader Nick Stanton. 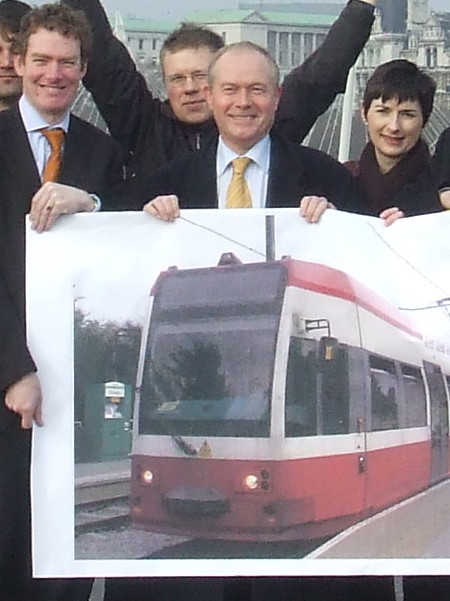 Southwark and Lambeth Councils have continued to fly the flag for the Cross River Tram scheme since Boris Johnson removed it from Transport for London's business plan last November.

The tram would link Peckham and Brixton in the south with Euston, King's Cross and Camden Town in the north, via Elephant & Castle and Waterloo Bridge.

Answering a question from Cllr Caroline Pidgeon AM at last week's Council Assembly meeting, Cllr Stanton said: "I met with Boris Johnson on 16 June when we discussed a number of issues including the Cross River Tram.

"Mayor Johnson is still very keen that the tram is developed, although he has made it clear that Transport for London (TfL) is unable to provide funding.

"I am pleased to be able to report that the Mayor agreed to write to Lord Adonis to ask him to consider funding the project.

"In light of the new high-speed domestic services from St Pancras to destinations in East London and Kent, the argument for creating this vital additional link between South and North London is stronger than ever."

Cllr Pidgeon cited the remarks of the Mayor of London's transport advisor Kulveer Ranger at this year's State of London debate when he said that the Cross River Tram would be "top of the list" of projects to be revived when funding was available.

Transport secretary Lord Adonis has said that a new high speed rail line from London to Birmingham and Manchester is "the project about which I am most passionate and the reason I came to the department" and now Southwark councillors argue that any such national infrastructure project will also require spending on improved connections within central London.

"I think it's very clear that Lord Adonis is extremely keen on developing the high speed rail link, and ... clearly that might attract even more north-south traffic across London than is currently the case," said Nick Stanton.

"We have – off the peg – a costed, fully routed scheme that would get people to and from Euston across the river, relieving pressure on the Northern line which is already overburdened.

"I'm more than happy to continue to do what we can to push this scheme.

"What is required for this scheme to happen is a big amount of capital. It's only going to come from some level of government greater than Southwark. We need to go after whatever funding opportunities are available."