Bus passengers and drivers in SE1 can expect plenty of delays and diversions this autumn with major roadworks in Tooley Street, Borough High Street and New Kent Road. 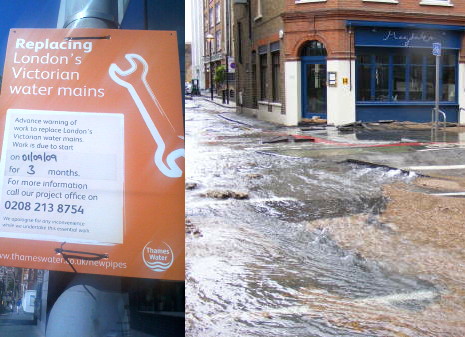 In Tooley Street Thames Water will be carrying out work on the 1890 water main that burst in April 2008 and May 2009 causing widespread disruption and damage.

An independent review of the 2008 flood concluded that the pipe appeared in good condition and that localised ground movement was the most likely cause. Investigations into the 2009 flood are ongoing.

Work on the main starts on 1 September and continues till December. Whilst working in the area Thames Water will also replace the smaller Victorian cast iron pipes with new plastic ones to ensure they do not have to return at another time.

Tooley Street will be closed westbound between Druid Street and Battlebridge Lane for the first phase of work. Bus routes 47, 343, RV1 and N47 will be diverted via Tanner Street, Druid Street, Crucifix Lane, St Thomas' Street and Stainer Street.

In New Kent Road Transport for London is about to embark on a resurfacing programme. Work on the carriageway will take place at night whilst the pavements will be resurfaced during the day.

Changes will also be made to the junctions at Rodney Place, Theobald Street, Leroy Street and Mandela Way. Some temporary road closures and diversions will be put in place during the works.

On 21 September Thames Water is due to start a two-month project to replace the water mains on Borough High Street near Borough Underground Station.

Buses on route C10 westbound (towards Victoria) will be diverted via Tower Bridge Road and Great Dover Street and will not serve stops in Long Lane.