Man killed near Ministry of Sound named as Gary Johnson

The man killed in the early hours of Monday morning near the Ministry of Sound nightclub at Elephant & Castle has been named as Gary Johnson, 25, of Streatham. 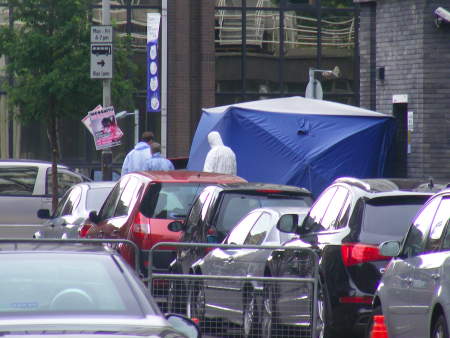 Although the man has not been formally identified, police are satisfied that he was Gary Johnson. He was found dead in the street near the Ministry of Sound nightclub in Gaunt Street at around 4.15am on Monday.

Officers were called to reports of shots being fired in the street. A post-mortem examination gave the cause of death as head injuries, believed to have been caused by a collision with a vehicle.

A second man, aged 29, was taken to hospital suffering from a gunshot wound to his shoulder. He was discharged on Tuesday and has been arrested in connection with the inquiry. He is in custody at a south London police station.

"We are working to establish the circumstances of the incident," says DCI Mark Dunne from the Homicide and Serious Crime Command.

"At this early stage I must keep an open mind as to any motive."

Anybody who witnessed the incident or has information that may assist police should call the incident room on 020 8721 4906; if you wish to remain anonymous call Crimestoppers on 0800 555 111.